Palin: An Apocalypse Of A Different Kind 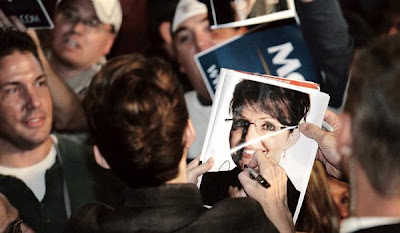 John McCain's last media availability was on August 13. Sarah Palin has not had a media availability in the 25 days since she burst on the national scene and has sat for only two interviews, one with ABC News at which she took offense because she was asked a few tough questions and one with the ever indulgent Fox News that was a scripted love feast.

The Palin Cone of Silence shtick got old after a couple of weeks because it made light of a situation that is decidedly unfunny: The Republican campaign's claims that the vetting-free Alaska governor is ready for prime time -- and absolutely the gal to be a heartbeat away from the presidency of a septuagenarian with health issues -- when she is being hidden from any semblance of it.

The WaPo notes that:

"Mr. McCain is entitled to choose the person he thinks would be best for the job. He is not entitled to keep the public from being able to make an informed assessment of that judgment. Ms. Palin's speech-making skills are impressive, but the more she repeats the same stump speech lines, the queasier we get. Nor have her answers to the gentle questioning she has encountered provided any confidence that Ms. Palin has a grasp of the issues."

Meanwhile, the one encounter with participatory democracy that Palin apparently can't duck is the vice presidential debate, but even here there is mischief afoot.

"At the insistence of the McCain campaign, the Oct. 2 debate between the Republican nominee for vice president, Gov. Sarah Palin, and her Democratic rival, Senator Joseph R. Biden Jr., will have shorter question-and-answer segments than those for the presidential nominees, the advisers said. There will also be much less opportunity for free-wheeling, direct exchanges between the running mates.

McCain advisers said they had been concerned that a loose format could leave Ms. Palin, a relatively inexperienced debater, at a disadvantage and largely on the defensive."

Meanwhile, the daily round-up of lies and obfuscations about Palin's career as a small-town mayor and then governor continue to pile up. And then there's her belief in the end times, that Alaska that will be the refuge for the faithful in the lower 48 states when the Rapture comes

Sam Harris calls her out:

"Palin's spiritual colleagues describe themselves as part of 'the final generation,' engaged in 'spiritual warfare' to purge the earth of 'demonic strongholds.' Palin has spent her entire adult life immersed in this apocalyptic hysteria. Ask yourself: Is it a good idea to place the most powerful military on earth at her disposal? Do we actually want our leaders thinking about the fulfillment of Biblical prophecy when it comes time to say to the Iranians, or to the North Koreans, or to the Pakistanis, or to the Russians or to the Chinese: 'All options remain on the table'?"

Photograph by Jack Dempsey/The Associated Press
Posted by Shaun Mullen at 12:55 PM
Email ThisBlogThis!Share to TwitterShare to FacebookShare to Pinterest