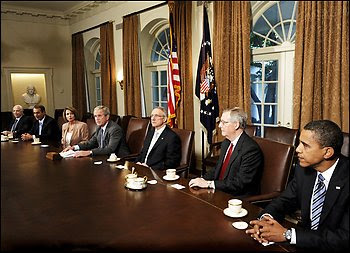 U P D A T E
Blaming Barack Obama and Congress, in other words everyone but himself for the failure of his latest and boldest attempt to game voters, John McCain has announced that he will be in Mississippi tonight for the first presidential debate.

McCain reversed field after having declared that he couldn’t face off against Barack Obama unless a deal was reached on the Wall Street financial aid bailout. A campaign spokesman cited progress in bailout negotiations as the reason McCain had relented, but as of this writing no progress has been reported.

* * * * *
How many days like Thursday must pass before it becomes obvious that John McCain has peaked as a political force and is an increasingly addled and cynical old man who isn't even able to figure out what his own message is at a time when Americans are crying out for decisive leadership.

McCain declared on Wednesday that he was throwing down the gauntlet: He would suspend campaigning, pull TV advertising and ride Holy Crusader-like to the rescue of the foundering $700 billion Wall Street bailout plan. And would not appear at tonight's inaugural presidential debate, as well.

When McCain did arrive in Washington, his knight's armor tarnished after weeks of slash-and-burn politics that along with the unmasking of Sarah Palin as a resume without a woman had sent the ticket's poll ratings spiraling southward, he sat like a lump on a log at an hour-long White House meeting with President Bush, Barack Obama and congressional leaders, and when he finally did speak offered only bromides about the financial crisis.

As the sun came up this morning . . . oh, sorry, it was raining in Washington and throughout most of the Northeast . . . the big question was why McCain had made such a big deal of pretending to step away from the campaign trail when he had nothing to offer when push came to shove. The obvious answer: The entire affair was a cynical ploy to distract attention from his imploding campaign.

The presence of McCain in Washington -- and Obama as well after Bush extended an invitation to him -- had the effect of doing exactly what the Democratic challenger had warned after McCain's surprise announcement:

"What I've found," Obama said, "And I think it was confirmed today, is that when you inject presidential politics into delicate negotiations, it's not necessarily as helpful as it needs to be. Just because there is a lot of glare of the spotlight, there's the potential for posturing or suspicions. When you're not worrying about who's getting credit, or who's getting blamed, then things tend to move forward a little more constructively."

"I understand how important this debate is, and I'm very hopeful. But I also have to put the country first."

Perhaps he was unable to be more coherent because he hadn't even read a summary of the bailout plan until Tuesday, four days after it was released to congressfolk, and even then wasn't able to grasp what it was all about.

With bailout plan negotiations now in turmoil, McCain -- or rather his handlers -- have outsmarted themselves at what is shaping up to be the most crucial juncture in the most important presidential election in decades. This unintended consequence is entirely of McCain campaign's own making, yet another cheap fabrication that collapses under the most cursory scrutiny.

McCain has sustained a deeply embarrassing injury. It's as if he punched himself in his groin. Hard.

He has hurt himself not because of Obama or events that demanded that he make a bold gesture, but because of an infamous compulsiveness that led to the selection of Palin, who remains wildly popular among Republicans for her surface glamour but has become a drag on the ticket in its quest to draw in other voters as she keeps flubbing the few appearances that she makes.

(An aside: Could someone please tell Palin that saying "Yeah" is okay when you've just shot a defenseless animal from a helicopter, as in "Yeah, I got that bugger right between the ears." But it is not appropriate in chatting up world leaders or responding to questions from the rare interviewer. It is not merely un-presidential. It's un-vice presidential. And further reveals Palin to be not a work in progress, as her handlers would like to belive, but is just crude and hopelessly unrefined.)

McCain, a champion of the very financial deregulation that is a core cause of the financial meltdown, has tried to be all things to all voters during the campaign He now finds himself between a very big rock and a very hard place as the scorching reviews roll in on the backfire from his decision to get all leadershippy on Wednesday and then fail to deliver on Thursday.

The conservative Republicans who make up McCain's political base have found their voices. They are vehemently opposed to the Bush/Henry Paulson bailout package because of the obscene amounts of money that it throws at big financial institutions. The White House, as well as many Democrats and some Republicans, insist that the package has to be passed quickly and with few restrictions if the U.S. isn't to sink deeper into a recession and possibly worse.

Where does McCain stand? Beats me. And I suspect he himself is at a loss as to where he stands as well.

McCain seems to have difficulty doing even one thing well, let alone multitasking. (God, how I hate that word). Obama correctly noted after McCain's own bailout on Wednesday that a president has to do many things simultaneously, and the notion of shuttling to Washington for deliberations, preparing for a debate and campaigning at the same time should not be daunting.

But it is daunting for the septuagenarian McCain, or at least he has worked hard to create that appearance. With more than two-thirds of voters telling pollsters that they intend to watch the debate tonight, he has further done his dash by insisting that he cannot face Obama while the bailout package that he has done nothing to move along remains in limbo.

My guess is that McCain may yet relent because the alternative is 90 minutes of prime-time Obama face time with Jim Lehrer of PBS's "News Hour." But even if he does the fact remains that his wounds are self inflicted. Washington may be broken, but so is the McCain-Palin campaign.