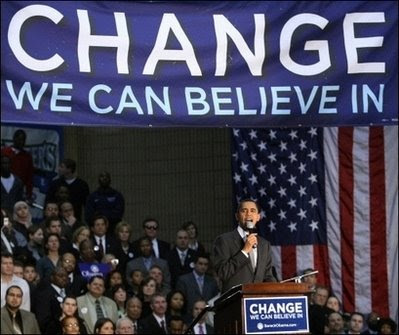 ROANOKE, Va. — Two weeks ago, Senator Barack Obama's presidential campaign gleefully publicized a spate of news reports about misleading and untruthful statements in the advertisements of his rival, Senator John McCain. Asked by a voter in New Hampshire if he would respond in kind, Mr. Obama said, “I just have a different philosophy, I’m going to respond with the truth,” adding, “I’m not going to start making up lies about John McCain.”

A radio advertisement running in Wisconsin and other contested states misleadingly reports that Mr. McCain "has stood in the way of" federal financing for stem cell research; Mr. McCain did once oppose such federally supported research but broke with President Bush to consistently support it starting in 2001 (his running mate, Gov. Sarah Palin of Alaska, does not support it).

A new television advertisement playing in areas with high concentrations of elderly voters and emphasizing Mr. McCain’s support for President Bush’s failed plan for private Social Security accounts misleadingly implies Mr. McCain supported "cutting benefits in half" — an analysis of Mr. Bush’s plan that would have applied to upper-income Americans retiring in the year 2075.

It's going to be fascinating to see how John McCain plans to campaign with a hidden running mate.

McCain has more than 40 top advisers and fundraisers who have lobbied or worked for gambling interests. Several of McCain's closest personal friends are casino executives. He receives more money from the gambling industry than almost any member of Congress, especially those outside Nevada and New Jersey. And he loves heading to casinos, traveling to Las Vegas regularly for "weekend betting marathons," overruling aides who've asked him to consider the appearances -- not only of a man who gambles too much, but also of a senator who has enormous oversight responsibilities of the gaming industry.

There is no evidence of Sarah Palin conducting any trade missions with Russia.

The Palin pick was the most crassest, most bigoted decision that I've seen in national electoral politics, in my--admittedly short--lifetime. There can be no doubt that they picked Palin strictly as a stick to drum up the victimhood narrative -- small town, hunters, big families and most importantly, women. Had Barack Obama picked Hillary Clinton, there simply is no way they would have picked Sarah Palin. To the McCain camp, Palin isn't important as a politician, or even as a person. Her moose-hunting, her sprawling fam, her hockey momdom, her impending grandmother status are a symbol of some vague, possibly endangered American thing, one last chance to yell from the rafters "We wuz robbed." Line up all your instances of national politicians using white victimhood to get into offices -- Willie Horton, White Hands, Sista Souljah, Reagan in Philadelphia etc. -- they were all awful no doubt. But I have never seen a politician subject an alleged ally to something like this.

How extraordinary to find that, for two straight days, the American media would preoccupy themselves with the question of who had the greater right—in a debate over foreign-policy "experience," of all things—to quote Henry Kissinger. And how even more extraordinary that it should be the allegedly anti-war Democratic candidate who cited Kissinger with the most deference and, it even seems, the greater accuracy.

Mr. McCain's lead-with-the-chin approach to Russia reflects the same pugnacity that resulted in obscenity-laced dust-ups with fellow Republican senators, but it's less endearing when the risk is nuclear war. Do we really want to risk an exchange of nuclear warheads over Abkhazia or South Ossetia? The Spanish prime minister, José Zapatero, told me a few days ago that what he fears most under a McCain administration is a revival of the cold war with Russia. . . .

All in all, it’s astonishing that Mr. McCain seems determined to return to Mr. Bush's first-term policies that have been utterly discredited even within the administration. Judging from Mr. McCain's own positions, on foreign policy he could well end up more Bush than Bush.

Would it really be fair to go on with the election when Obama has been campaigning the whole time McCain has been fixing America’s problems? And I don’t think most Americans would mind letting George Bush stay in office a little longer, which will give us a little more time to steel ourselves and get ready for all the changes John McCain has in store for us when he does get elected. Electing McCain in November might not give Americans enough time to adjust to such a radical transformation from the last eight years. I think Americans would welcome a bit of a breather first.