Has O.J. Finally Run Out Of Lives? 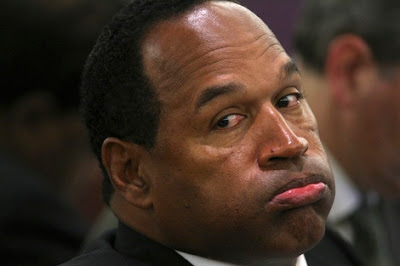 With opening arguments set to begin Monday in the bizarro armed robbery-kidnapping of two sports memorabilia dealers in a Las Vegas casino hotel room, it appears that O.J. Simpson, like the proverbial cat, has finally run out of lives.

Simpson and Clarence Stewart, one of the five other men originally charged in the September 2007 incident, face a dozen charges. The four others have pleaded guilty and will testify against The Juice.

Simpson and Stewart have pleaded not guilty, while Simpson says he was trying to recover items stolen from him and did not see any weapons despite substantial testimony at a preliminary hearing to the contrary.

In a development that recalled the racial issues surrounding Simpson's 1995 trial for the deaths of wife Nicole Brown Simpson and her friend Ron Goldman and his subsequent acquittal, Simpson and Stewart contend that African Americans were systematically excluded from the Las Vegas jury.

Nine women and three men, none of them African American, were selected as jurors. One of the six alternates is black.

At the 1995 trial, nine of the 12 jurors were black, while reactions to the verdict broke down along racial lines with most African Americans unconvinced of Simpson's guilt and most whites convinced that the case against him was solid.

My own view as a journalist who covered the trial is that Simpson was as guilty as sin but justice was done in its own messy way because the prosecution did not prove his guilt beyond a reasonable doubt.

There is irony in Simpson's contention that blacks were intentionally eliminated from the Las Vegas jury.

This is because in a society that judges a person by the color of their skin, Simpson had something that few well-known black Americans can claim: He was so accomplished and at one time was so popular that, in advertising agency parlance, he was "race neutral."

That is to say that when most people looked at him they saw not a black man who happened to have overcome a disadvantaged childhood in a broken home, but a handsome and gifted athlete who had found fame and fortune by parlaying outstanding college and professional football careers into a successful career off the field selling everything from men's footwear to rental cars, and later as a not-bad Hollywood actor. Who just happened to be black.

Two years after the murder trial, the Brown and Goldman families were awarded $33 million in compensatory and punitive damages in a civil trial that to Simpson seemed like a big joke.

He had bottom crawled to Florida after the murder trial where liberal bankruptcy laws have shielded him from many of his creditors, and aside from an occasional dust-up on a golf course or in a nightclub, as well as his off again, on again "fictional" account of the murders, he was mercifully out of the news if not out of trouble until the Las Vegas incident.

Perhaps no one knows when Simpson hit bottom -- probably not even The Juice himself -- but it probably occurred sometime in the run-up to the murders, which I believe were a consequence of a cocaine-fueled binge, a fit of jealousy, or both.

In any event, it is sadly obvious that Simpson, whose good looks have faded at age 61, has been crawling along the bottom since then. As extraordinary as it seems, he now faces serving life in prison for the second time in 13 years.

Photograph by Ethan Miller/Getty Images
Posted by Shaun Mullen at 3:39 AM
Email ThisBlogThis!Share to TwitterShare to FacebookShare to Pinterest

I believe it's called karma.

It was disgusting to see in the aftermath of the first trial the outrage of whites who had no trouble turning a blind eye to the problems of young blacks and Latinos who are warehoused in prisons in this country.

But take heart white America! Here's your second chance to put the murdering bastard away.

That's more of a chance at justice than any black or brown person will get.