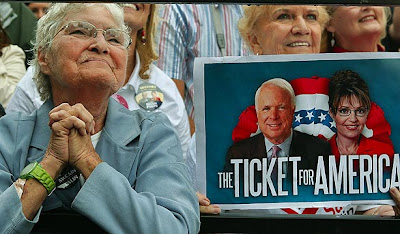 The election of Barack Obama would be a catastrophe on the scale of the Great Flood and the Permian Extinction all rolled into one. His ascension to the presidency will mark an end to the American Experiment in self government, open the door for socialism, allow for the payment of reparations to former slaves, ensure the triumph of radical Islam (after turning the White House into a mosque), bring back the Fairness Doctrine, require everyone to become a homosexual, allow the United Nations to run our foreign policy, bring Ahmadinejad over for coffee and some of Michelle's delicious snack cakes, and turn the United States into a vassal of Sweden.

And that’s not the worst of it.

An Obama victory would also force the Republican party to take a long, hard look at itself and work to discover where things went off the rails. The deadwood and deadheads who are currently in control of the party would be kicked upstairs in order to make room for a new generation of leadership; sobered by defeat, cognizant of the mistakes made in the past, eager to reform everything from the budget process to ethics, and most importantly, able to develop a plan to not only win back power but govern the country once victory is achieved.

A victory by McCain will derail that effort by several years if not, for all practical purposes, shelve it completely. What need is there for reform if we're winning – even if victory takes the GOP farther away from answering fundamental questions regarding philosophy and identity? John McCain the reformer will find a brick wall if he tries fundamental party reform. Those currently in power are a big part of the problem and it is hardly realistic to believe they will simply fall on their swords and give way to others with new ideas and little baggage to make reform a reality.

Now you see why the wingnut base loves [Palin]. Rude, obnoxious, condescending, dishonest and overconfident and underqualified are not bugs when you are a Republican, they are a feature. Just take her word for it- she is qualified. And fuck you if you question her.

When this election is over, the Obama campaign's cool demeanor will either be seen as its signature genius ("They kept their heads about them") or its signature flaw ("They failed to respond to their opponent's strategy"). We'll know in 48 days.

[H]ow do you fight an opponent that not only lies, but then tells lies about the lies?

. . . Other campaigns have lied, and yes, Democratic ones as well as Republican. But none I've ever covered has lied like this one and told lies about the lies and then gone and played the victim to its base voters and then, as a parting shot, shut off all serious press inquiries so that it didn't really have to answer any difficult questions about its lies. John McCain, of "straight talk" fame, hasn't spoken with the reporters on his plane in more than a month.

So what are the Obama people supposed to do in the face of this? I honestly don't know. You can try to persuade a few figures of authority with some bipartisan credential to step forward and call lies lies, but most such people will be chary of doing that. Or maybe you can get down in the gutter. It's certainly what they deserve.

The hacker who broke into Sarah Palin's email account has, of course, been roundly condemned for his actions, but he has for the moment succeeded in reviving the unanswered question of why the Alaska governor had two quasi-official email addresses, gov.palin@yahoo.com and gov.sarah@yahoo.com. So central were the private accounts to Palin's state office that her secretary admonished a government aide who accidentally used a government email address instead. This use of the accounts is a naked affront to public records laws in Alaska. But it's not exceptional: It's one battle in a 30-years war between conservatives and civil libertarians over government openness, during which the current presidential administration itself blurred the lines between public and private email. Is there any way to finally stop these hijinks?

Will the neocons who tutored George W. Bush in the ideology he pursued to the ruin of his presidency do the same for Sarah Palin? Should they succeed, they will destroy her. Yet, they are moving even now to capture this princess of the right and hope of the party.

Aside from the lying attack ads on Barack Obama, the Republican effort to hold onto the Bush White House has deteriorated into wheeling out a new John McCain with every headline, accompanied by a plastic Palin figure nodding and smiling like a 21st century Pat Nixon with a few lines of actual dopey dialogue.

In the past week alone, McCain has morphed from the champion of free enterprise to an angry populist regulator of Wall Street, from a confident believer in the soundness of the economy followed a redefinition of "fundamentals" as the workers, not the complicated stuff of facts and figures.

McCain's recent conduct of his campaign -- his willingness to lie repeatedly (including in his acceptance speech) and to play Russian roulette with the vice-presidency, in order to fulfill his long-held ambition -- has reinforced my earlier, and growing, sense that John McCain is not a principled man.

In fact, it's not clear who he is.

Despite an intense effort to distance himself from the way his party has done business in Washington, Senator John McCain is seen by voters as far less likely to bring change to Washington than Senator Barack Obama. He is widely viewed as a “typical Republican” who would continue or expand President Bush’s policies, according to the latest New York Times/CBS News poll.

The last three weeks have been the most surreal I can remember in any campaign, centered, of course, on the on-going farce of the Palin candidacy. But if you had been on another planet for the past month and had been asked to predict it, you would have guessed two convention bounces almost identical to the ones we have seen and the race returning back to a small but clear Obama lead. I think white racism means that Obama needs more than a small but clear lead to win. But still: from afar, no real change after the last month. Advantage: Obama.