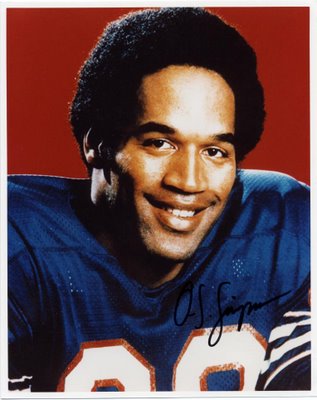 His book and TV interview may have died aborning, but The O.J. Simpson Blood Money tour rolls on.

The Juice has acknowledged that he wrote "If I Did It" for only one reason -- personal profit, but hides behind his motherless children in rationalizing why:

"This was an opportunity for my kids to get their financial legacy. I made it clear that it's blood money, but it's no different than any of the other writers who did books on this case. . . .

"My kids would have been coming into a lot of money."


Simpson said he got far less than the reported $2.5 million for the book, which the man widely regarded as the killer explained how he might have murdered Nicole Brown Simpson and Ron Goldman. He won't say how much he was paid, but claims to have already spent the money to pay the tax man.

Oh, and by the way, O.J. says he's still innocent.

More here and here.
Posted by Shaun Mullen at 12:23 AM
Email ThisBlogThis!Share to TwitterShare to FacebookShare to Pinterest