Can Ségolène Save France? 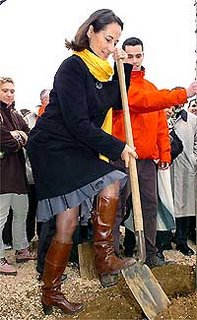 There is one thing about Ségolène Royal that we know for sure: She knows how to use a shovel. Whether she can save France from itself remains to be seen.

Riding a wave of popular disgust with the French government and waging a smart cyber campaign, Royal has received the Socialist Party's nomination for president and has a good shot to be one of the top two vote getters in the crowded first round of the presidential race on April 22. The top two will square off in the final vote on May 6.

Under President Francois Mitterand and his calcified and male-dominated government, France has become an increasingly marginal player in the European Community and on the world stage.

The gutless Mitterand has been justly criticized for his wimpy response to urban rioting involving the children of emigrees last year and then whiny mobs of spoiled brat college students last spring who protested efforts to reform France's over-regulated economy.

More here.
Posted by Shaun Mullen at 4:09 AM
Email ThisBlogThis!Share to TwitterShare to FacebookShare to Pinterest