Iraq: Good News Out of Anbar, But Can It Last? 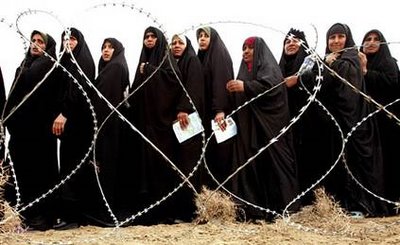 Sunni women line up to vote in Anbar Province
While I have long admired Bill Roggio for being one of the very few people reporting on the War on Terror to have the cojones to go to Iraq and Afghanistan and keep going back, he used to piss me off because of his adamantly rose-colored view that the U.S. mission in both countries would prevail.

Well, Roggio is bowed but not broken, to turn around the familiar phrase. While many war pundits are blogging from a Starbucks (and I from a kitchen table with a commanding view of a bird feeder), Bill is currently embedded with Marines in vast Anbar Province in the heart of the fearsome Sunni Triangle.

While he acknowledges that things are not going swimmingly overall (witness the horrible carnage this week alone), Roggio says that

"Lost in the current debate over -- civil war or sectarian violence, success or failure, increasing troops or strategic redeployment, victory or defeat -- is the sea-change occurring in western . The military has coaxed a large majority of the Sunnis of Anbar province, perhaps one of the most sympathetic groups to Al Qaeda in the , to turn on Al Qaeda. The choice wasn't difficult after the tribes saw what Al Qaeda had to offer."

This news is very good.

That is because long after the last Shiite has blown up the last Sunni, Al Qaeda and other terrorist groups will still be doing their thing. You know, the insurgents who were absent from Iraq until Rumsfeld's horribly botched occupation opened the door to droves of them.

The bad thing is that successes like the one Roggio describes, and there have been some, have a way of becoming defeats because of that momentum thingie:

The focus of U.S. commanders shifts, too often because of political dictates back at the White House and Pentagon, or there simply are not enough troops and other resources.

Roggio did not address this issue -- what troops must be able to do to keep the momentum going in Anbar and allow it to spread elsewhere -- in his comprehensive report at The Fourth Rail, so I asked him to do so.

Bill got right back to me and this is what he said:

He goes in depth on the question in a recent podcast with Ward Carroll, the editor of Military.com.


(Photograph by Erik de Castro/Reuters)
Posted by Shaun Mullen at 12:26 AM
Email ThisBlogThis!Share to TwitterShare to FacebookShare to Pinterest

"The U.S. military has coaxed...", this little excerpt tells you everything you need to know why the US is losing the war. The US is always the mighty subject, and the natives are always the insignificant object. Almost 4 years at war, and the most precise terms the press can come up with is "the Sunnis", and "Al Qaeda". Combining stunning egocentrism and breathtaking ignorance is always a good way to lose a war.