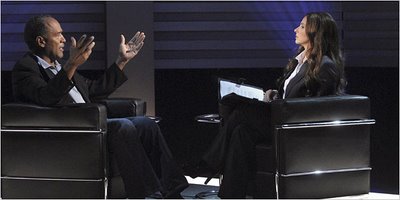 The Interview That Never Was: O.J. Simpson and Judith Reagan
America has become a nation of such exerable bad taste that it was gratifying that media baron Rupert Murdoch, the king of scandal, has however belatedly pulled the plug on a book and TV interview with O.J. Simpson in which the man widely regarded as the killer was going to tell how he might have murdered his former wife and her friend.

By the time Murdoch acted, booksellers had returned to HarperCollins over 70,000 copies of Simpson’s stillborn "I Did It."

"The accounts were treating the book as if it was pornography."

News of the book and interview prompted calls for boycotts and numerous TV stations said they would refuse to carry the program. And Denise Brown, Nicole's older sister, said that the publisher tried to silence the Brown and Goldman families with millions in hush money.

Murdoch gets no credit because it's obvious that he could have pulled the plug on the project months ago if he had scruples.

His News Corporation controls the Fox network, which was going to air an interview next week with Simpson conducted by Judith Reagan, whose ReaganBooks, a subsidiary of News Corporation's HarperCollins, published "If I Did It."

"I and senior management agree with the American public that this was an ill-considered project. We are sorry for any pain this has caused the families of Ron Goldman and Nicole Brown Simpson."

News Corporation execs apparently had forgotten that projects involving The Juice have met with public outrage in the 11 years since he was acquitted of the two murders following the so-called Trial of the Century. He later was found responsible for the deaths in a civil trial and ordered to pay $33.5 million to the victims’ families.

When the controversy broke, I put in my two-cents worth here as a journalist who covered both trials. David Scott Anderson, who blogs at In Search of Utopia, knew Simpson back in the day and like many African Americans had believed him to be innocent. Why he has changed his mind is worth reading.
Posted by Shaun Mullen at 2:03 AM
Email ThisBlogThis!Share to TwitterShare to FacebookShare to Pinterest

Thanks for the Link Shaun, it's an honor to have a referral from you.

Am I the only one that is bothered by the bad grammar in the title of the book? That alone would be reason enough not to buy it. I don't want to read about crimes OJ would like to commit (or ones he did or didn't either for that matter).

The bad grammar is interesting because of a little known fact: O.J. Simpson is only marginally literate, a source of considerable embarrassment to him. (Hell of an education he got at USC, no?)

The book was ghost written and presumably edited, so I can only guess that the title was what O.J. wanted.