Update on The Decider's War on Civil Liberties 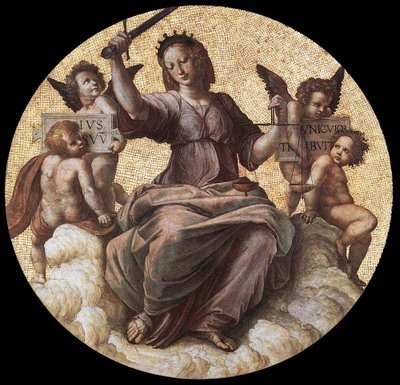 Raphael's "Justice" (1509-11)
The Justice Department is at it again, seeking to turn the case of foreign student arrested in the U.S. on terrorism-related charges into another test case of Congress' power to strip federal courts of the authority to hear habeas challenges.

As I noted in a post earlier this month on the status of the landmark Hamdan v. Rumsfeld case, mischief such as this will have a whole lot more bearing on the future conduct of the War on Terror -- and the future of America and its core values such as habeas corpus -- than the news du jour.

Meanwhile, here's what's going on with the case of Al-Marri v. Wright in the Fourth Circuit Court:


Lawyers for Ali Saleh Kahlah al-Marri, a citizen of Qatar who was arrested almost five years ago at his home in Peoria, Illinois, while he was a student at Bradley University, urged the Fourth Circuit Court this week to deny the president the authority to detain him as an "enemy combatant." Relying on the Civil War era case of Ex parte Milligan, the lawyers argued that "the Constitution prohibits the military imprisonment of civilians arrested in the U.S. and outside an active battlefield."

Lyle Denniston notes at SCOTUSBlog that the case:

"[H]as the potential for confining the President's detention authority to the situation that was explicitly before the Court in 2004 in Hamdi v. Rumsfeld, one of the Court's first rulings on war-on-terrorism issues. The Court there ruled that the President had the power to detain combatants 'in the narrow circumstances alleged in this case' -- that is, an overseas capture in a field of combat of forces hostile to the U.S.

"But, the Justice Department . . . argued that the Fourth Circuit no longer has any authority to decide Al-Marri's case, because it is a habeas challenge and Congress in the new Military Commissions Act of 2006 stripped the federal courts of all authority to rule on detainees' habeas cases. The case thus should be dismissed, the government argued in the filing."

Be afraid, America. Be very afraid.

Click here for Al-Marri's brief and here for the Justice Department's response.

THE DECIDER SHOOTS HIMSELF -- AND CIA -- IN THE FOOT


Further evidence has emerged that The Decider personally approved directives that have guided the CIA's controversial interrogation and detention guidelines for terror suspects, which include the use of torture and a network of secret overseas prisons.

The intelligence agency has been forced to acknowledge the directives in response to an ACLU lawsuit.

This turn of events followed the president's announcement in September that he was sending 14 prisoners from secret prisons to Guantánamo Bay for trial, but this baldfaced political grandstanding backfired.

The CIA had argued that anything having to do with interrogations and detentions had to be kept secret, including in a court of law, but if the president could blab about them, then why couldn't they be discussed in court?

Why indeed? But although the Justice Department now acknowledges the existence of the documents, it still refuses to release them.

Posted by Shaun Mullen at 10:07 AM
Email ThisBlogThis!Share to TwitterShare to FacebookShare to Pinterest