Iraq IV: Catch Him If You Can 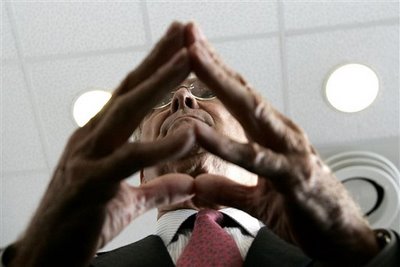 You may have heard that a human rights group is sharpening its knives and is suing outgoing Defense Secretary Rumsfeld for mistreating a 9/11 plotter.


The Center for Constitutional Rights has filed the claim in a Berlin court on behalf of Mohammad al-Qahtani and 11 Iraqis who claim they were tortured in Baghdad’s infamous Abu Ghraib prison.

The suit will be filed in Germany because courts there claim “universal jurisdiction” for war crimes, while the group's star witness is expected to be the former Abu Ghraib "warden," retired Colonel Janice Karpinski.

Those two factoids -- venue and star witness -- pretty much tell you all you need to know about the suit.

I'm not saying that Rumsfeld shouldn't be in the dock for his ill deeds. He probably should, and I have argued strenously that his boss, The Decider in Chief, fits the war-criminal bill. Rumsfeld also probably needs to think twice before booking a flight to a country that might look favorably on his detention.

But if Rumsfeld is to be sued, it should be in an American court with real standing, not a court of convenience.

And Karpinski as a star witness? She was busted from brigadier general and drummed out of the Army because there was ample evidence showing that the Abu Ghraib abuses occured in part because she had a lackadaisical attitude about the day-to-day operations of the prison.

WIN ONE, LOSE ONE?
Peter Boyer pitches the notion in a zillion word New Yorker piece that Rumsfeld reformed the Army and lost Iraq. No doubt about the latter, beaucoup skepticism on my part about the former.

"Rumsfeld had arrived at the Pentagon convinced that the American military had to be broken down and rebuilt, and he had done just that. In Rumsfeld’s six-year tenure, he had initiated a dizzying list of reforms, some deemed necessary even by his critics, from the restructuring of the Army’s once-cumbersome fighting formations to the repositioning of American forces abroad . . . But it is also true that the Iraq war has severely stressed the Army, and Rumsfeld’s reluctance to significantly increase the size of the force has it stretched to its limits. It is a war-honed and immeasurably more knowledgeable Army, precisely because it is bound up in a conflict with no apparent end, facing a resourceful enemy who daily presents some new lethal challenge. . . . It is caught in a de-facto civil war that has cost the lives of more than twenty-eight hundred service members, and those of many times that number of Iraqis.

"Donald Rumsfeld might have made a fine peacetime Defense Secretary. But it may also be that Rumsfeld would never have lasted in peacetime. He survived in the job because war came, and he used the wars to force change upon a recalcitrant professional military. In a real sense, the war in Iraq allowed Rumsfeld to create his transformed military, even while presenting it with a mission that it may not be able to win—a war like Vietnam."

(Photograph by The Associated Press)
Posted by Shaun Mullen at 4:23 AM
Email ThisBlogThis!Share to TwitterShare to FacebookShare to Pinterest