O.J. Simpson: Still Juicing Us After All These Years 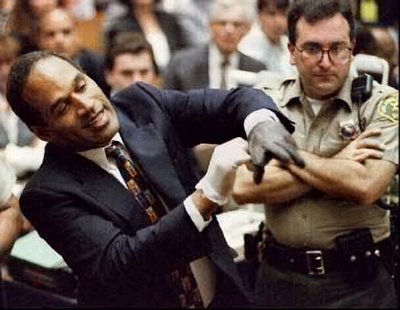 O.J. Simpson is back in the news for writing a book in which he explains how he would have killed Nicole Brown Simpson and Ron Goldman had he been the murderer.

O.J.'s former wife and her friend gave their lives. I was more fortunate. All I gave was nearly a year and a half of my life covering the murder investigation and so-called Trial of the Century, and a few weeks a couple of years later on the civil trial.

When people find out that I covered the criminal trial, which ended in October 1995 with a not-guilty verdict that tended to be viewed as "shocking" if you were white and "right on, brother" if you were black, I'm asked if I thought that O.J. "did it."

"O.J. was the murderer, but an inept police department and dithering prosecution were overmatched by a brilliant defense team in a trial presided over by a judge who lost control of his courtroom.

ALL O.J. ALL THE TIME
Like many people of my generation, I admired Orenthal James Simpson, first as a Heisman Trophy-winning running back at USC, then through a record-setting Hall of Fame career with the Buffalo Bills and a second career as Hertz rental car TV ad spokesman and better than expected Hollyweird actor.

O.J. Simpson was "race neutral," which is a PR man's dream. That means that when most people looked at him, they saw a talented, handsome and successful man, not a black man who happened to be those things.

Like most folks, I first focused on the story when O.J. and police engaged in the famous slow-speed freeway chase. I was living at a place with a supersized satellite TV dish, which we swung around to the west so we could watch the bizarre crawl on an L.A. station, occasionally cutting away to an NBA playoff game.

The next day, I was summoned to the Big Guy's Office at the newspaper where I worked and was told that for the indefinite future it was going to be:

Some 550-plus newspaper stories, commentaries, nationally syndicated columns and talk show appearances later (with a single day off to cover the April 1995 bombing of the federal building in Oklahoma City), I went back to the real world.

HAVE WE GOT FAULT LINES FOR YOU
As someone who has covered his share of big stories during a long newspaper career, I can say without equivocation that most of them were hyped. The Great Y2K Scare -- you know, computers everywhere would crash at the stroke of midnight on January 1, 2000 -- is the most pungent example.

But as I look back on those halcyon days in Judge Lance Ito's courtroom -- the fake goatee, barking dog, bloody socks, DNA samples and gloves that didn't fit -- I believe that is was impossible to overhype the O.J. Simpson saga.

Bear with me while I try to explain why:

* It was a screenwriter's dream with sex, drugs and . . . well, maybe not rock 'n' roll, but celebrities out the wazoo.

* It laid bare fault lines between blacks and whites that lie just below the surface of American society.

How each group was perceived by the other and, more pungently, how each were treated by the justice system.

* Less noticed was that it laid bare fault lines between men and women.

Why did Nicole Brown Simpson take a long bath and then light candles and put on romantic music before Ron Goldman showed up the night of the murders?

* It revealed the Los Angeles Police Department to be deeply dysfunctional.

Some its officers, including star witness Mark Fuhrman, were unapologetically racist.

* It was the prime-time debut of a state-of-the-art forensic technology called mitochondrial DNA analysis.

Today such tests of perpetrators' blood is commonplace, especially in missing persons cases, but back then it was so suspect that even the defense team had its doubts.

* It was a tutorial on trial law.

No matter how compelling the evidence presented by the prosecution, the jury had to be convinced beyond a reasonable doubt to convict. It wasn't. The standard for the civil trial was a preponderance of evidence. Which there was.

Two of the print publications that did the best job covering the story were strange bedfellows -- the National Enquirer and New York Times. And it was a coming of age for Court TV and E!, today two cable staples, and for now well-known commentators like Greta van Susteren and Dominic Dunne.

* It created a media punditocracy.

With all due respect to the Scopes Monkey Trial, Lindberg kidnapping trial and espionage trial of Ethel and Julius Rosenberg, the O.J. Simpson trial was indeed the Trial of the Century.

Some 150 million people watched the reading of the verdict on TV, and no story since -- Michael Jackson, the Oklahoma City bombing trial, Clinton impeachment, Natalie Holloway disappearance, even the 9/11 terror attacks -- has come close to capturing the popular imagination.

SICK AND TWISTED
I came to see O.J. Simpson as a deeply complex and conflicted person.

Friends invariably described O.J. as kind and generous, and I believe he was. I think he handled fame better than many people. He was a good father. But beneath that impish grin lurked another O.J. -- a man prone to fits of jealousy and rage who had a weakness for cocaine and other drugs.

But back to where I began: The news that O.J. has taken time off from his lonely search for the killers to pen "If I Did It."

The ghostwritten tome, to be published by HarperCollins, already has made it the 54th best selling book at Amazon based on advance orders, and The Juice himself will be promoting it in an interview on the all-too-willing Fox network.

Is this O.J. Simpson's way of confessing?

Without a reasonable doubt. But instead of facing arrest and a new trial, which he is protected from because of double jeopardy, there's a big pay day.

Should Judith Reagan, the super influential boss of HarperCollins, be ashamed?

Of course. But she is shameless and has said, by way of rationalizing publication of the Juice's trash, that as a victim of abuse herself, she'll make sure that royalties from the book go to his motherless children.

Is the whole thing tasteless?

Yes. Even Bill O'Reilly, the judgment impaired Fox News commentator, is covering his nose over the forthcoming interview, which will be conducted by . . . Judith Reagan. Oh, I forgot to mention that HarperCollins and Fox are both owned by media mogul Rupert Murdoch. And to give credit where it is due, NBC turned down Reagan when she peddled the interview to that network.

But tasteless compared to what?

O.J. Simpson is just another twisted celebrity who needs to pay his bills (including the $33 million plus interest to the victims’ families after the civil trial verdict), as well as maintain his lifestyle and addictions. And plenty of people are more than willing to oblige him.

Is this a great country, or what?
Posted by Shaun Mullen at 4:13 AM
Email ThisBlogThis!Share to TwitterShare to FacebookShare to Pinterest

O.J. Simpson is fooking guilty. O.J. Simpson should be fooking shunned by the civilized world. And I'm not buying you a fooking beer even though you just wrote a fooking good piece.

How about a really little beer?

I have lived The OJ Simpson Case for over 12 years. I was personally involved in this case(and still am) and had an article written by Bill Boyarsky of The Los Angeles Times and published on June 23rd, 1995. WHAT A COVER-UP comcerning Rocky Bateman, Myself, and Bill Wasz.

What do you know about Rocky Bateman? I'll bet NOT MUCH, and that's not your fault.

Please check my website's out: