Iraq: The Focus Shifts From Staying to Leaving 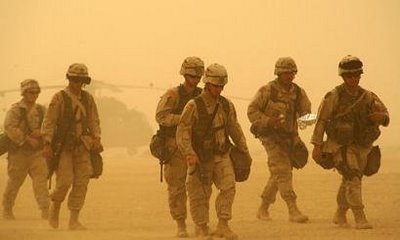 The concept of the "tipping point" has gotten a thorough workout in the Iraq war.

I count three such points:

The first Battle of Fallujah in November 2004. This when when the Pentagon brass, shocked over the rout of Marines by insurgents who took over the provincial capital city, realized that the U.S. could not prevail using conventional tactics.

The bombing of the Golden Mosque in Samarra in February. This is when it was no longer possible to turn back the wave of sectarian violence and Iraq plunged into civil war.

The mid-term election on November 7. This is when the White House and conservative warmongers finally understood that a majority of Americans not only didn't support the war, they wanted the U.S. to get the hell out.

There has a palpable sense of gloom over the war at the White House and Pentagon since the election. Add to that the avalanche of "victory is no longer possible" statements from former supporters like Henry Kissinger and you picture the giant ship that is the U.S. mission on the verge of crashing into an iceberg.

Now comes word that a super-secret Pentagon review of how to avoid the iceberg has concluded there are three options:

"Go Big," the first option, reports Thomas Ricks of the Washington Post, would have required several hundred thousand additional U.S. troops as well as heavily armed Iraqi police to try to break the cycle of sectarian and insurgent violence. But the Pentagon study group concluded that there are not enough troops in the U.S. military and not enough effective Iraqi forces.

"Go Home," the third option, called for a swift withdrawal of U.S. troops but was rejected by the study group as likely to push Iraq directly into a full-blown and bloody civil war.

The group then devised "Go Long," a hybrid plan that combines part of the first option with the second one and calls for cutting the U.S. combat presence in favor of a long-term expansion of the training and advisory efforts.

"The purpose of the temporary but notable increase . . . would be twofold: To do as much as possible to curtail sectarian violence, and also to signal to the Iraqi government and public that the shift to a 'Go Long' option that aims to eventually cut the U.S. presence is not a disguised form of withdrawal."

Posted by Shaun Mullen at 2:01 AM
Email ThisBlogThis!Share to TwitterShare to FacebookShare to Pinterest

Your metaphor seems a bit off. This particular ship hit the berg a long time ago. The sounds you hear now are the bulkheads bursting. It's high time to catch the last lifeboat, it seems most of rats have already left.

I don't disagree. My point is that when the ship hits the berg it will sink. You are right about the rats.