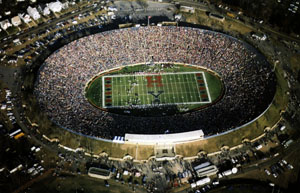 A packed Yale Bowl in the good old days.
Way back in early September, the DF&C and I wore shorts and t-shirts to the our first college football game of the season. Tomorrow afternoon, we'll bundle up in winter jackets, ski caps and gloves for the last game.

Our team will have had a winning season, but not winning enough to make the post-season playoffs and a shot at the national championship. While that is a disappointment for a program that has brought home six national championships, it's only a game. Besides which, hope -- as in the 2007 season -- springs eternal.

What has not been a disappointment is that the program has remained true to its values. Academics come first, and the graduation rate of the players is much higher than the study body at large at a time when college football is increasingly commercial and besodden with scandal.

That's also the way it is at the Ivy League schools, whose football teams were booted from the big time because of a simple act of defiance 25 years ago and as punishment now play in the same division as my own school.

To find out why, click here.
Posted by Shaun Mullen at 4:09 AM
Email ThisBlogThis!Share to TwitterShare to FacebookShare to Pinterest