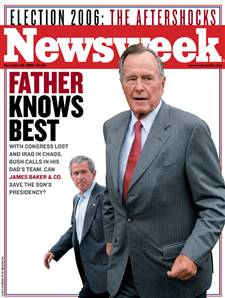 I had a father who was a great athlete and a fine artist. I got his artistic genes but not his athletic ones, yet he never once made me feel bad that I didn't make the football team, couldn't play basketball worth a tinker's dam and barely managed to letter in track.

I do not presume to be able to look into the mind of George Walker Bush, but I don't have to be a shrink to know that with along with all his other problems, he has a tortured relationship with his father, George Herbert Walker Bush, that hovers between petulance and outright resentment.

This second guessing included snide but accurate references to Bush Père having to again call a tow truck to get Junior out of a ditch, only this time the kid is not running some Oil Patch company into the ground, he's running the country into the ground.

The nomination of Roberts Gates, a confidante of his father, to replace Donald Rumsfeld at the Pentagon and the flurry of activity involving the Iraq Study Group, led by the elder Bush's closest friend, James Baker, would seem to be an occasion for Junior to thank Senior. But not a word has escaped his lips to that effect.

How else to explain the sudden and surprising creation of the White House's own study group on Iraq than this tortured father-son relationship?

And is it really any more than a taxpayer-funded temper tantrum?

Posted by Shaun Mullen at 2:20 AM
Email ThisBlogThis!Share to TwitterShare to FacebookShare to Pinterest