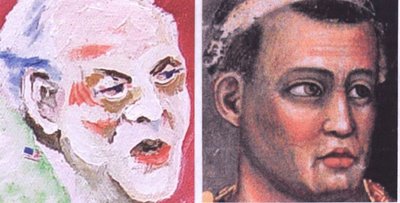 So there I was slowly coming down from my post-election, post-Rumsfeld high. I'm hanging out with the kitties on the couch, reading the latest issue of Vanity Fair and listening to Vivaldi while sipping on a wee finger of single-malt Scotch to help digest the last traces of schadenfeunde.

Just when I thought that I was no longer capable of being outraged by the neoconservative cabal (after all, we don't have Rummy to kick around anymore), I turn the page to an interview with a vile sack of neocon fecal matter by the name of Richard Perle.

Perle, you will recall, was one of the chief architects of the catastrophe in Iraq along with Rumsfeld, Paul Wolfowitz and Dick Cheney.

As Defense Policy Board chief, Perle loudly proclaimed that there was a link between Saddam Hussein and Osama bin Laden after the 9/11 attacks, worked feverishly to justify the invasion, called "traitorous" anyone in Congress who dared question him, and "incompetent" the military commanders who said there weren't enough troops to do the job right.

Perle expected the American liberators to be greeted with flowers. But he is quoted in the Vanity Fair article as saying that:

"The levels of brutality that we've seen are truly horrifying, and I have to say, I underestimated the depravity."

Perle adds without much conviction that total defeat can be averted, but a U.S. withdrawal would leave Iraq in a state of anarchy. The result?

"You'll get all the mayhem that the world is capable of creating."

And the reason for this unfolding catastrophe?

"Devastating dysfunction within the administration of President George W. Bush."

Perle sniffed his last Rose Garden flower in 2004, and this dysfunction apparently did not apply to a man who would betray his own mother, let alone his country.

While Pontius Pilate washed his hands after Jesus was crucified, no amount of washing is going to get the blood of all those dead Americans and Iraqis off of your hands.

May your nightmares be many and filled with the souls who were beheaded, disembowed and blown to smithereens by IEDs because of your arrogance and intellectual dishonesty.

When you depart this mortal coil, may you rot in the special hell created for people like yourself who led us into the Morass in Mesopotamia and then slunk off with their tails between their legs when the going got tough.

And when you get there, say howdy to Saddam for us.

Posted by Shaun Mullen at 12:49 AM
Email ThisBlogThis!Share to TwitterShare to FacebookShare to Pinterest