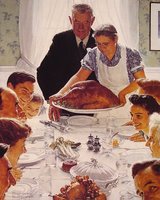 I was a little tough on Thanksgiving in a post yesterday. I wouldn't necessarily change a word, but a couple hours of cell phone time did give me a different perspective.

Between the DF&C and I, we called a 10 or so family members and friends from Buffalo to San Diego.

All said the same thing in their own way: Don't worry. Be happy.

So I was. And I am.
Posted by Shaun Mullen at 12:19 AM
Email ThisBlogThis!Share to TwitterShare to FacebookShare to Pinterest