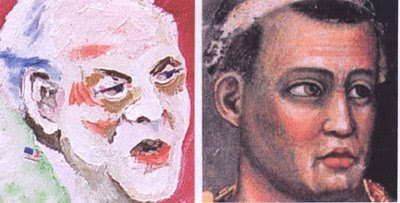 I am a softy at heart and statements of regret from public officials who have seen the error of their ways go a long way in my book. Then there is Richard Perle, who not only remains regret free over the damage he wrought in the early years of the Bush administration but now suffers from revisionist amnesia.

Lest you have forgotten, Perle was the leading architect of a neoconservative foreign policy predicated on bombing over diplomacy and one of the puppet masters who put the Decider up to the Iraq war.

As Bush's Defense Policy Board chief, he loudly proclaimed that there was a link between Saddam Hussein and Osama bin Laden after the 9/11 attacks, worked feverishly to justify the invasion, called "traitorous" anyone in Congress who dared question him, and "incompetent" the military commanders who said there weren't enough troops to do the job right.

Perle's only flirtation with contrition came in a Vanity Fair interview in 2006, but it was others whom he said should have regrets about the Iraq war -- the unnamed individuals responsible for what he told VF was "the devastating dysfunction within the administration of George W. Bush."

Perle has continued to busily shake and bake his record, but now has outdone himself by asserting that there is no such thing as a neocon foreign policy; in other words, essentially claiming that he doesn't exist.

I compared Perle to Pontius Pilate a while back, and the letter I composed to him seems more appropriate than ever: