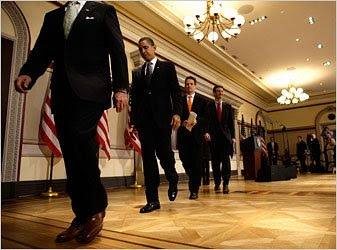 PRESIDENT OBAMA AND HIS BUDGET ADVISERS

President Obama's new budget blueprint estimates a stunning deficit of $1.75 trillion for the current fiscal year, which began five months ago, then lays out a wrenching change of course as he seeks to finance his own priorities while stanching the flow of red ink.

By redirecting enormous streams of deficit spending toward programs like health care, education and

energy, and paying for some of it through taxes on the rich, pollution surcharges, and cuts in such inviolable programs as farm subsidies, the $3.55 trillion spending plan Mr. Obama is undertaking signals a radical change of course that Congress has yet to endorse. . . .

January Durable Goods fell a greater than expected 5.2% (consensus was -2.5%) but ex transports, the

Bottom line, there is absolutely nothing within today's data to hang one’s hat on as the deterioration continues and the dark tunnel sees no end.

A Zombie Bank is a financial institution whose liabilities outweighs it assets, making its net worth less than zero. ZBs continue to operate because of the implicit or explicit government guarantee -- along with truckloads of taxpayer monies.

Consider the two biggest Zombie banks -- Citigroup and Bank of America. They have each recieved $45 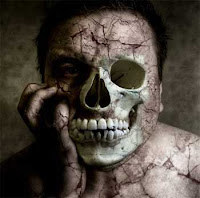 billion in capital from the US government -- far more than either bank is worth. Additionally, the US had guaranteed up to 90% of the bad assets each zombie is holding -- $250 billion and $306 billion respectively.

The term comes from Japan's lost decade following their real estate bubble. The Japanese kept their zombie banks alive, delaying the eventual recovery by a decade.

The reason I favor nationalization is that I hope we here in the US avoid a lost Japan-like decade . . . Keeping these banks propped up with more and more taxpayer monies -- the Obama Administration has proposed $750 billion more in bank-rescue aid -- is not the way out of this mess.

I don't want [Obama] to fail. Anybody who wants him to fail is an idiot, because it means we're all in trouble. 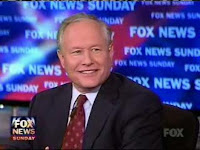 [William] Kristol is reprising his role in the 1994 health reform debate, when he urged Republicans to oppose reform "sight unseen" rather than work toward a constructive alternative. His current advice is equally disingenuous. Kristol is saying that Republicans should raise objections about the speed of legislation, pick fights, point to foreign policy -- but not because they actually care about the speed of the legislative process or the other fights they're going to pick. It will all be a pretext to stop Obama's agenda.

Is this the kind of thing he should be admitting in public? 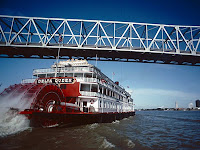 Louisiana has gotten $130 billion in post-Katrina aid. How is it that the stars of the Republican austerity movement come from the states that suck up the most federal money? Taxpayers in New York send way more to Washington than they get back so more can go to places like Alaska and Louisiana. Which is fine, as long as we don't have to hear their governors bragging about how the folks who elected them want to keep their tax money to themselves. Of course they do! That’s because they're living off ours.

Gov. Jindal's stories of self-reliance were inspiring. Like Michelle Malkin, who is a big fan of his, he is an anchor baby whose parents arrived here from India to exploit our 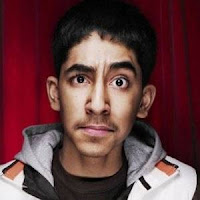 lax immigration laws but nevertheless proved that people who are different races can be successful if they make an effort to fit in and act like real Americans. Instead of acting angry and entitled like some minorities do, Gov. Jindal was so happy and optimistic I thought he was about to bounce up and down like Tigger the way Slumdog Millionaire director Danny Boyle did when he won the Oscar. Gov. Jindal is America's real-life slumdog millionaire.

But what really inspired me was the story he told about how people in leaky little boats tried to save the citizens of New Orleans after Hurricane Katrina even though government bureaucrats tried to stop them. If the government had stayed out of New Orleans entirely and encouraged more people to use their boats or to make their own boats out of things around the house, more people would probably be alive today. And instead of waiting for inefficient government workers to fix the levies, ordinary New Orleans citizens could have patched them up using bubble gum and duct tape and good old American know-how.