prosecuting them before military tribunals. But there is an historic precedent dating back to Abraham Lincoln, of all presidents, and the infringements of the Great Emancipator on civil liberties arguably were greater than during any period in American history -- including the last eight years.

George Bush's rationale for suspending habeas corpus, which is the major constitutional deterrent against arbitrary government legal action, was much the same as Lincoln's: The fate of the U.S. hung in the balance because of a war, the laws of war are different and the president-commander in chief must be allowed extraordinary latitude to interpret and use these laws as he sees fit.

Lincoln's suspension of habeas corpus and use of military tribunals were but two of several unilateral acts that the new president took between the outbreak of the Civil War with the bombardment of Fort Sumter on April 12, 1861 and the official convening of a special war session of Congress on July 4 of that year.

Without the permission of Congress, Lincoln also declared martial law, greatly increased the size of the Army and Navy, appropriated funds for huge purchases of arms, instituted a naval blockade of Southern ports and issued a series of orders for the military to put down any local efforts to impede the Union as it prepared for what at the time (and not unlike Iraq) was assumed to be a short war.

Much as the Bush administration wrapped some of its

controversial actions in legalese and as Lincoln would do with great deliberateness for most of what evolved into an awful four-year conflict, the 16th president termed these actions not as the result of a declaration of civil war but rather the suppression of a rebellion.

Lincoln tried to assuage a wide range of groups who backed the war and favored emancipation of the slaves. He also understood that only Congress was (and is) constitutionally empowered to declare war, while suppression of rebellion was (and is) recognized as an executive function, including the prerogative of setting aside civil procedures such as habeas corpus. 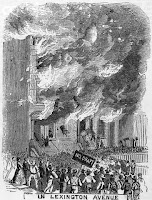 Reaction to Lincoln's constitutional sleight of hand was fast and furious for a people only 70 years removed from the excesses of British rule, and there was widespread outrage that the president was permitting arbitrary arrests and quashing the right to protest the conduct of the war.

John Merryman, a pro-South resident of Maryland who recruited soldiers for the Confederate Army, was among those caught in these crosshairs.

On May 25, 1861, Merryman (photo, below right) was arrested by the military, charged with several treasonous acts and incarcerated in Fort McHenry in Baltimore harbor. When his lawyer sought a writ of habeas corpus -- a procedure by which Merryman could be immediately released if his imprisonment was found to not conform to law -- Supreme Court Chief Justice Roger B. 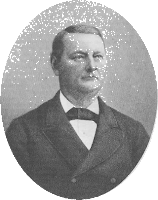 Taney ruled that he was being held illegally.

Taney issued a writ to Fort McHenry commander George Cadwalader directing him to produce Merryman before the court the next day, but Cadwalader refused on the grounds that Lincoln had authorized the suspension of the writ of habeas corpus.

Taney (photo, below left) then issued an attachment for Cadwalader's arrest for contempt, but a marshal was unable to enter the fort to serve it. The justice, recognizing the impossibility of enforcing his order, produced the now-famous opinion, Ex parte Merryman, which vigorously defended the power of Congress alone to suspend habeas corpus.

Legal scholars, while recognizing that the Constitution permits suspension of the writ in "cases of rebellion and 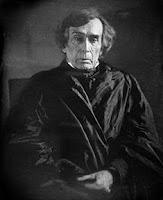 when the public safety" requires it, have been arguing ever since about who was in the right.

Taney relied on the fact that the right to suspend the writ is in Article I, Section 9 of the Constitution, which describes congressional duties, while some scholars note that it was placed there merely because the Committee on Style that organized the Constitution could find no other place for it.

But the chief justice did fail to acknowledge that the fate of the nation was indeed at stake. In any event, Congress resolved the ambiguity two years later when it permitted the president the right to suspend the writ while the "rebellion" continued.

Lincoln himself understood the dilemma he had put himself and the Union in, writing to a friend:

"Must I shoot a simple-minded soldier boy who

deserts, while I must not touch a hair of a wily agitator who induces him to desert? . . . I think that in such a case, to silence the agitator, and save the boy, is not only constitutional, but, withal, a great mercy."

* * * * *
Lincoln authorized military commissions because they had the capacity to act quickly and secretly. 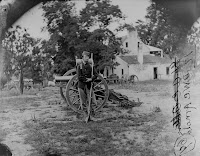 Some 13,000 people were arrested under martial law during the war, including a number of outspoken newspaper editors. The Union Army conducted 4,271 trials by military tribunal, although none was as notorious as that of Clement Laird Vallandigham, the best-known Copperhead of the era, who was to the tribunal system what Merryman was to habeas corpus.

Vallandigham (photo, below right), a pro-Confederacy Democratic congressman from Ohio and leading Copperhead, was one of Lincoln's sharpest critics, charging that the president was conducting a "wicked and hazardous experiment" by suspending the writ and taking other sweeping actions without the permission of Congress. 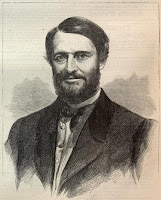 He was arrested by Major General Ambrose E. Burnside on May 5, 1863, as he spoke at a Democratic Party rally in Mt. Vernon, Ohio and taken to Kemper Barracks, the military prison in Cincinnati. He was tried there by a military commission that found him guilty of treasonous acts and sentenced him to imprisonment for the duration of the war.

After being denied a writ of habeas corpus, Vallandigham applied for a writ of certiorari to bring the military tribunal's commission proceedings before the Supreme Court for review. His application was denied in the opinion Ex parte Vallandigham on the grounds that the high court had no jurisdiction over a military tribunal, a marked contrast to three stinging rebukes of the Bush administration by the high court, which ruled in 2006, 2007 and 2008 that the Military Commissions Act was out of legal bounds because of its suspension of habeas

corpus and other kangaroo court trappings.

A year after the Civil War was over, the court revisited the habeas corpus issue in Ex parte Milligan, ruling in the case of Confederate sympathizer Lambdin Milligan (photo, left) that the writ could only be suspended by Congress and then only in a situation where civil courts were not operating. The ruling was adjusted in 1942 in Ex parte Quirin, which distinguished that Milligan had been a civilian whereby the Quirin defendants were German soldiers.

* * * * *
While Lincoln was to emerge as a champion of emancipation and other progressive causes, he believed absolutely that the suspension of habeas corpus and extensive use of military tribunals were more than justified in the service of preserving the 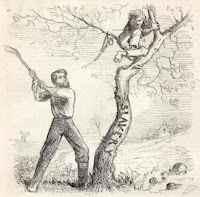 Union, while Bush's supporters have said much the same thing in the context of the War on Terror.

This would seem to put people like myself who consider Lincoln to be the greatest president and Bush among the worst in a box. It is not possible to get out of that box entirely because some of Lincoln's more extreme actions like the arrest of people who did nothing more than badmouth the president are indefensible.

But the situations then and now bear scant resemblance.

In 1861, the republic was literally torn apart, there were widespread reports of rebellions in the North and Washington itself was in danger of being captured. In 2001, a complacent administration ignored warnings of a terrorist attack on the homeland 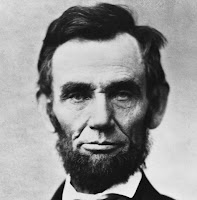 and after that attack came rounded up several hundred people, very few of them actual terrorists, torturing some and holding almost all indefinitely in an imperial power grab that in context was far greater than Lincoln's.

And while Bush was seen toting around a bestselling book about the Civil War following the 9/11 attacks, he certainly did not learn from Lincoln's mistakes.

Nice article!It seems you have researched well to write this historical stuff.