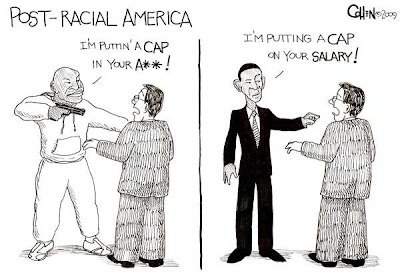 Guess I should’ve enjoyed the postracial vacation. Counting from inauguration it lasted, what, three and a half weeks? I mean, that's practically a European-length get-away from race as usual. But this week we find ourselves right back in our cubicles.

And this is what was waiting in the inbox. This cartoon received precious little attention last week, considering the racial clusterbomb that went off in the NYP's offices. From where I stand, this is far more offensive. The Post cartoonist could at least cop to terminal cluelessness about the association of Obama specifically with the crazed chimp. The above offering is a hamfisted shout-out to the most resonant stereotype in American society: the black criminal.

That said. I don’t think that we can or should rally the troops around Obama every time a cartoonist goes off his meds and his editor trips over the boundary between edge and outrage. The reality is that all Presidents are subject to unfair criticism -- though Obama is the first for whom that criticism has taken on a racial hue. Carter and Clinton were both ridiculed as backwater hicks (how often did we see references 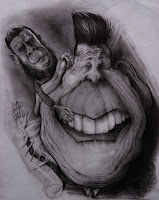 to Clinton's libido paired with images of his down-home roots?)

Reagan’s advancing years brought with them a harvest of Alzheimer’s jokes: Did you hear that Ronnie announced he has Alzheimer’s . . . Again? Lincoln was ridiculed in Northern newspapers and depicted as (irony of ironies) part Negro and Andrew Jackson's wife was assailed as a bigamist in the newspapers of the day.

At the risk of being cynical, I'm taking it as a good sign that this cartoon was largely ignored. All of us, but especially we black folk, are going to have to develop thicker skin and a shrewder sense of when we go Al Sharpton on some fool and when we offer the empty-heads only the tinny echo of their own isolated voices.

A lot of my work, for those who have followed it over the years, is based on the

glories of the English language and it’s many opportunities for satire and manipulation. When I heard about the salary cap proposed by the President, my mind looked for a comparable phrase that might be related and cartoonable. I have personally heard, not only in person, but also in published, broadcast music, the phrase, "putting a cap in yo' ass," not to mention a Chris Rock routine on Comedy Central.

Now, to illustrate that point, I drew a black man pointing a gun at a white man. Not to represent ALL black people; A black person. Every white person that I draw only represents that person, not all white people.

Cartoonists use shortcuts a lot of the time to get a point across; unlike columnists, we don't have a thousand words, so we have to get to the heart of the matter pretty quickly and succinctly. 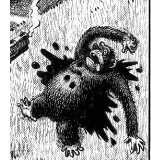 Last week, we made a mistake. We ran a cartoon that offended many people. Today I want to personally apologize to any reader who felt offended, and even insulted.

Over the past couple of days, I have spoken to a number of people and I now better understand the hurt this cartoon has caused. At the same time, I have had conversations with Post editors about the situation and I can assure you -- without a doubt -- that the only intent of that cartoon was to mock a badly written piece of legislation. It was not meant to be racist, but unfortunately, it was interpreted by many as such.

We all hold the readers of the New York Post in high regard and I promise you that we will seek to be more attuned to the sensitivities of our community.

Murdoch's ownership of multiple media outlets in the city.

The leaders, including the Rev. Al Sharpton of National Action Network, announced their plans on the same day that Murdoch, chairman of News Corp., issued an apology for the cartoon that appeared in the Post, the city tabloid his company owns.

Drawn by Sean Delonas, it showed two police officers, one with a smoking gun, standing over the body of a bullet-riddled chimp. The caption reads: "They'll have to find someone else to write the next stimulus bill."

Although Murdoch's apology was called "a good gesture" by the civil rights leaders and council members, it didn't go far enough, they said.