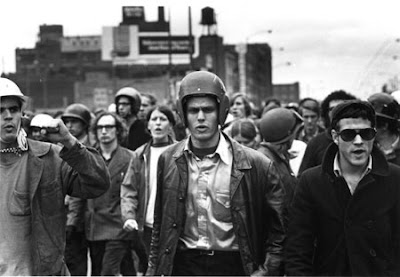 I'll get this turdball rolling by noting that I knew several members of the Weather Underground back in the day and am a longtime friend of one whom I invited into my home when he was a fugitive. But even in the context of those crazy times, the Weathermen were a bunch of zonked-out wannabe revolutionaries who ultimately diverted attention from their occasionally worthy causes by doing a lot of really bad stuff.

All that so noted, I had a hard time getting behind President Clinton's pardon of two members of the Weather Underground for some very serious criminal acts on the eve of George Bush's 2001 inauguration but have a whole lot less of a problem with Bill Ayers, a former but never arrested Weatherman and present-day University of Illinois professor who hosted a fundraiser in his home for Barack Obama when the presidential candidate was running for the Illinois Senate.

My biggest problem is with the other Democratic candidate, Hillary Clinton, whose ability to outdo her last stupidly vicious attack on Obama seems to be limitless.

If you watched or heard the "debate" on Wednesday night, then you known that Clinton whacked Obama hard on his "ties" to Ayers. This has to mean (cough, cough) that she also disagrees with her husband’s decision to pardon Susan L. Rosenberg, who was convicted of participating in a 1981 Brink's armored car robbery in Rockland County, New York, that left a guard and two police officers dead, and Linda Sue Evans, who consorted with the North Vietnamese during the Vietnam War, was implicated in several bombing plots and was toting around nearly 800 pounds of explosives when the law caught up with her.

Ayers, meanwhile, was linked to the 1970 townhouse bomb factory blast that killed three fellow Weathermen. For what it's worth, Ayers turned himself in to authorities in 1981 but was never arrested, while Rosenberg and Evans had to be hunted down and served some serious jail time before Bill Clinton pardoned them.

Hillary Clinton's compulsion to hurl fire and brimstone instead of talking policy, as well as conveniently ignoring the kinds of events and decisions during her co-presidency with Bill Clinton that she bangs Obama for, keeps hurting her and may end up being the biggest reason she will not be the nominee.

It is hurting her in Pennsylvania in the run-up to the do-or-die primary next Tuesday. It is hurting her among undecided superdelegates. It is hurting her nationally where her negatives are at stratospheric levels and steadily climbing toward the realm of the man she wants to succeed in the White House. It is hurting her because Americans are sick and tired of seven-plus years of meanspiritedness and don't want another four or eight.

But in this instance Mrs. Clinton has an opportunity to begin rehabilitating herself from whatever sliming syndrome she is suffering by attacking Bill Clinton -- please, not viciously, Hill -- for what in retrospect seems like an unconscionable pair of pardons which, compared to Obama taking tea with Ayers, is some very serious juju.

So, Mrs. Clinton, we're waiting for you to unload.