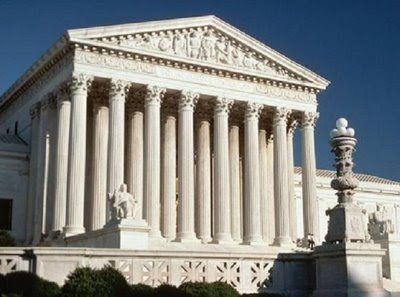 There is an old saying that Americans have to live with the decisions of the Supreme Court for the rest of their lives and then some, but that takes on a perverse new meaning for those who are maimed or their lives cut short by shoddily researched and falsely advertised medications that are inadequately vetted by the Food and Drug Administration and let slide by President Bush's activist Supreme Court.

It is deeply troubling that it is likely that the top court will soon rule the FDA -- which has been co-opted by Big Pharma and politicized by the White House to a shocking extent -- is the only agency with enough expertise to regulate drug makers and that its decisions should not be second-guessed by the courts.

A blood pressure medication and a cancer drug that is effective in controlling rheumatoid arthritis are coursing through my body as I write this. All have been long proven to be effective, have few side effects of consequence and are reasonably inexpensive when purchased in bulk through my employer's prescription drug plan.

So I come not to knock all drug makers and all drugs, but to point out that some people have not been so lucky as myself because of an unfortunate confluence of events: Big Pharma's capacity to be deceitful, its lust for profitable new drugs as opposed to new drugs that may be profitable, and an FDA that has proven time and again in the Age of Bush that it can be co-opted.

The New York Times, in a story that anticipates the Supreme Court ruling, cites the collusion between Johnson & Johnson and the FDA over a life-threatening problem with its once popular Ortho Evra birth control patch.

It turns out that Ortho Evra delivered much more estrogen than standard birth control pills, potentially increasing the risk of blood clots and strokes, according to the company's own internal documents.

But because the FDA approved the patch, Johnson & Johnson is arguing in court that it cannot be sued by women or their families who claim that they were injured or killed by the product — even though its old label inaccurately described the amount of estrogen it released.

"This legal argument is called pre-emption. After decades of being dismissed by courts, the tactic now appears to be on the verge of success, lawyers for plaintiffs and drug companies say.

" . . . More than 3,000 women and their families have sued Johnson & Johnson, asserting that users of the Ortho Evra patch suffered heart attacks, strokes and, in 40 cases, death. From 2002 to 2006, the food and drug agency received reports of at least 50 deaths associated with the drug."

What makes Johnson & Johnson's conduct so reprehensible is that documents and e-mail messages made public as part of the lawsuits against the company show that even before the FDA approved the product in 2001, the company's own researchers found that the patch delivered far more estrogen each day than low-dose pills. When it reported the results publicly, the company reduced the numbers by 40 percent.

The FDA did not warn the public of the potential risks until November 2005 — six years after the company's own study showed the high estrogen releases. At that point, the product's label was changed and prescriptions fell 80 percent, to 187,000 by last February from 900,000 in March 2004.

"We have regularly disclosed data to the F.D.A., the medical community and the public in a timely manner. Ortho Evra is a safe and effective birth control option for women when used according to the labeling."

A series of independent assessments have concluded that the FDA is poorly organized, scientifically deficient and short of money. In February, its commissioner, Andrew C. von Eschenbach, acknowledged that the agency faces a crisis and may not be "adequate to regulate the food and drugs of the 21st century."

The FDA does not test experimental medicines but relies on drug makers to report the results of their own tests completely and honestly. Even when companies fail to follow agency rules, officials rarely seek to penalize them.

While the Supreme Court still does occasionally rule against business interests, its pro-business tack has been evident.

Just as the Bush administration has set about methodically immunizing corporations who make killer medical devices, defense contractors who kill Iraqis, telecoms who let the government spy on its customers and financial institutions who make a killing on the backs of ordinary Americans, the Supreme Court has become business friendly and is now integral to that immunization -- or pre-emption -- process.

As Jeffrey Rosen wrote in a New York Times Magazine article titled "Supreme Court Inc.," a generation ago progressive and consumer groups petitioning the court could count on favorable majority opinions written by justices who viewed big business with skepticism — or even outright prejudice.

But today there are no economic populists on the court, and since John Roberts was appointed chief justice in 2005, the court has been more receptive to business concerns.

Forty percent of the cases the court heard last term involved business interests, up from around 30 percent in recent years. While the Rehnquist Court heard less than one antitrust decision a year, on average, between 1988 and 2003, the Roberts Court has heard seven in its first two terms.

All were decided in favor of major corporations.

There is a huge irony in all of this. The conservatives who angrily bloviated for years over "activist liberal judges" seem to have been struck deaf and dumb in this era of activist conservative judges in the highest court in the land.

You see, in the end it was all about special interests and politics, not the law.