If Hillary Clinton Can't Run A Campaign Then How Can She Run A Country? 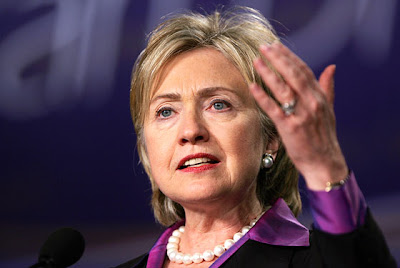 Two weeks hence, the results of the all-important primary will be in and poor Hillary Clinton will have to once again put those big goalposts on her itty-bitty shoulders and carry them on to the next round of primaries.

Yup, I've given up on having the sense to gracefully bow out because she is neither graceful nor a bower outer although she will not have the pledged delegates, superdelegates and popular votes to wrest the nomination from Barack Obama.

will only widen the gap.

I am the rare soul who predicts that Obama will squeeze by Clinton in Pennsylvania, yet another state seemingly tailor made for her. Most of the latest polls tend to back me up as she ham-handedly deals with a crisis affecting her labor union supporters of her own making and other core constituents dribble away from her in large enough numbers that she appears to have no chance of scoring a decisive win. The only question is how narrow the margin of her victory -- or defeat -- is.

Lost in the daily Sturm und Drang is that has never broken 45 percent in the national polls even as John Edwards and other candidates before him dropped out. She ended up losing Texas and might have lost Ohio as well had she not done some fancy footwork concerning Nafta (more about that later), while the negative campaigning of Angry Bill Clinton and other surrogates have had the result of covering herself in more mud than Obama.

Which begs a very big question: If Clinton can't even run a successful campaign with all of her built-in advantages, how can she be expected to successfully run a campaign against John McCain, let alone run the ?

It's not just that her campaign got off on the wrong foot in building an imperious top-down operation that disdained the hard work of grassroots organizing and positioned her as the experienced insider who deserved the nomination with no thought given to how she might try to earn it. It's that three months after Barack Obama threw a monkey wrench into the works by winning the caucuses, s campaign continues to be her own worst enemy.

The campaign has been unable to shift gears as Obama has caught up to and passed Clinton, and has suffered one distracting crisis after another, most recently the semi-dismissal of campaign strategist Mark Penn after Clinton finally was tripped up on the free-trade deceit that she had used to such good effect in blue-collar Ohio.

Fast forward to blue-collar Pennsylvania where a coalition of labor unions called her out on her claim that she opposed a bilateral U.S.-Colombia trade agreement while Penn was meeting with the Colombian ambassador to seal the deal.

Penn's tandem roles as 's wise man and chief executive of Burson-Marsteller, the global public relations firm, is not merely a conflict of interest. It is a window into who really is once you scrape away the tight-lipped smile and mascara.

Let's get beyond Penn's personal negatives, which include an overweaning arrogance, being a crass manipulator and a legendary abuser, including throwing things at people. Chinese take-out food is said to be a favorite.

Can you imagine Obama choosing as his key campaign operative a man whose firm represents Dow Chemical, Countrywide Financial and Blackwater Worldwide, among other pillars of corporate arrogance, as well as specializes in union busting?

Of course you can't. But it never occurred to Clinton that Penn is viewed by many people as a corporate shill and poster boy for much of what is wrong with the country she wants so desperately to lead. All that mattered to Clinton and her husband was that Penn was unflinchingly loyal; a trait a certain sitting president values above all others.

So loyal that her public statements that Penn is no longer with the campaign are demonstrably false and keeping him on board would seem to be more important than hanging onto blue-collar support in a state that like Ohio is bleeding jobs because of, in part, sweetheart deals with countries like Colombia.


I have some reservations about whether Barack Obama is big enough for the job and will discuss them at length when the Democratic slugfest is finally over.

But I do know that Hillary Clinton is committed to the very kind of inside deal making and principle-free politics that have allowed the upstart freshman senator from Illinois to have her for lunch in state after state -- and now possibly Pennsylvania, as well.

I wish I could share your optimism about PA. But sadly, I suspect that Clinton will take it by at least 10 points and then continue to torture us all with this faux-underdog persona for the next few (loooong) months until the convention. Here's hoping you're right.