10 Areas In Which McCain Is Vulnerable 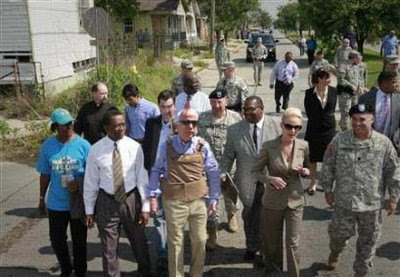 What that the Democratic presidential slugfest was mercifully over and Barack Obama could turn his full attention to John McCain. Here is a Top 10 list of areas in which the presumptive Republican nominee is vulnerable:

(10.) Hiding his assets behind his wife’s financial veil of secrecy.

(9.) Continuing questions about his anger-management issues.

(8.) His bumbling record on MIA-POW issues.

(7.) His fawning relationship with the hateful Reverend John Hagee.

(6.) His prevaricating about no longer having ties with majorly influential lobbyists.

(5.) His flip-flopping on torture.

(4.) His schizophrenia as a sometime conservative and sometime maverick.

(1.) His cynical, morally and financially corrupt "100 years in plan.

Image courtesy of Jess Wundrun at I Was Just Wondering

Posted by Shaun Mullen at 8:41 AM
Email ThisBlogThis!Share to TwitterShare to FacebookShare to Pinterest

Nice list. Number 5 especially since he was tortured himself and apparently denounced his country in the process. You'd think that someone who has done that would know full well how torture is used to elicit false confessions. Unless he actually does denounce his country, that is. Where's his flag lapel pin?