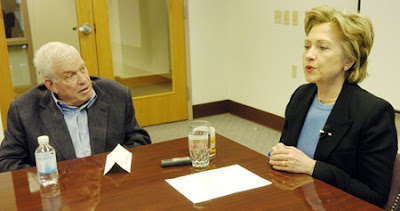 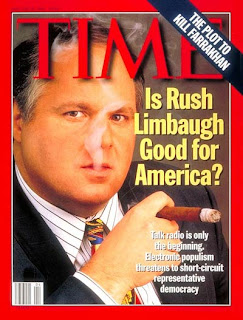 Limbaugh, for those of you who have spent the last few months in a cave, is the man behind Operation Chaos, an effort to get Republicans to vote for Hillary in Democratic primaries because they don't want no lefty Negro in the White House. Besides which, she is viewed as being the easier of the two to defeat.

So important is Limbaugh to Hillary's campaign that her chief pimp took a star turn on his radio show on the day of the primary.

The Rushmeister is taking credit for those one in 10 voters -- about 230,000 in all -- who say that they changed their party registration to cast ballots in the primary. This was more or less the margin of victory for Hillary

He recently chortled that:

"Ten percent of the vote is huge. That would be five times the past high for a crossover vote with a closed primary. That's an absolutely huge number -- and once again, ladies and gentlemen, that is Operation Chaos."

Lest anyone think that Limbaugh has a man crush on Bill or is back on the hard stuff, he has made it clear that Chaos "Democrats" will vote the McCain-Romney ticket in the fall. And for good measure is exhorting his listeners to foment riots during the Democratic National Convention in .

Limbaugh's claims that Operation Chaos has hurt Obama are unverifiable and even anecdotal evidence that these rump voters have helped Clinton is slim, but that is not the point. The point is that Hillary's tacit approval of this Ann Coulter with a stogie is not merely cynical, it's despicable.

Recall also that in the lead up to the Pennsylvania primary Hillary pole danced for Richard Mellon Scaife, the fruitcake Pittsburgh area gadzillionaire publisher who financed the Great Right Wing Conspiracy against she and Bill and famously accused her of murdering White House aide Vince Foster.

(And it's not for nothing that Republican luminaries like Karl Rove and William Bennett have been saying nice things about Hillary. They know that John McCain, saddled with the albatross of a despised president and the baggage of years as a Washington insider, stands a much better chance against another insider.)

What is particularly despicable about Hillary hooking up with Limbaugh and Scaife is that they are generals in the culture war that has riven American politics since the ascendancy of the Republican right wing. For Hillary to claim that she is an agent of change while climbing into the sack with these agents of polarization is all that you need to know about what lurks behind her tight-lipped smile.

Obama sought to explain his relationship with Reverend Jeremiah Wright in a speech on race and religion. Methinks that Hillary should take a page from her opponent's playbook and make her own speech.

This is what she could say:

This post should not be construed as the hankie wringing of an Obama supporter. All is fair in love, war and politics, and while I condemn Hillary's determined use of the political equivalent of unprotected sex, Obama hasn't been particularly effective at pushing back and staying on message, which raises yet another question in my mind about whether he is ready for prime time.

Is the language in this post intentionally provocative? Absolutely. Is it sexist? Some if not many people will think so, but I would use the same sort of imagery if Obama was engaging in such despicable behavior, and Hillary's relationships with once and future sworn enemies of the Democratic Party and the democratic process has gotten far too little attention and virtually no condom . . . er, condemnation.

Broder-esque tut-tutting is neither appropriate nor will draw the kind of attention that her behavior demands.

And before Hillary supporters get their foundation garments totally in a knot, they should pause before shooting the message to consider this most salient question: Will the legs-wide-open amorality with which Hillary has campaigned -- as in doing anything and anyone in the service of victory at any cost -- suddenly disappear if she makes an encore appearance at the White House?

No, of course not. Because politically speaking, once a slut always a slut.

Hey, Barack was on Fox.

Rush is an opinionated bully and IMO wrong on most things. He also has a number of unattractive personal attributes. Does any of that make him some sort of evil creature whose proximity implies contagion. I've had to work with people like that. It can be annoying, but I don't think it's had any long term health effects. Fact is, Rush is well beloved by dozens of scores of myriads of your fellow citizens. Do you fear to speak with them as well?

I think the whole Operation Chaos thing is silly, and I actually think McCain has a better chance of beating Obama, whereas Hillary really could win. If Obama is the nominee, he'll be shredded down into Dukakis territory. Hillary, on the other hand, can win Ohio, Pennsylvania and Florida. And frankly, why are Rush's tactics despicable? People can vote FOR or AGAINST whomever they please. Is it any more despicable than dailykos comparing Bush to Hitler? I know - you people think it's a worthy comparison, but it's an utter outrage. If he weren't a public figure, Bush would EASILY win a defamation suit. But who cares? The biggest letdown for you on the nutty left, is that even if Obama does manage to get elected, he will immediately disappoint, because he cannot effectively govern and act like a Marxist at the same time.

It's kind of evening the score, isn't it? Prior to Texas, Republicans who frankly admitted they still intended to vote for the Republican in the general election were crossing over to vote for Obama because they were afraid the Democrat will win in November and they didn't want it to be President Hillary.

Then Obama started looking credible and the RNC decided it was time to screw up the race even more by pushing to get them to vote for Hillary instead.

I think Rush's plan has less to do with pushing Hillary to the nominatino than it does just keeping the race and the acrimony going so the Democrats won't be able to come together to win in November, no matter who the nominee is. Certainly, with them both going after each other instead of what the conservatives have been doing to wreck our country, they've been giving the Republicans and McCain a free ride, helping the media and the RNC defeat them.

If they'd been doing the business - going after the conservative program to destroy America, and giving McCain the derision he so richly deserves - I'd be saying it was all to the good. But since they haven't been doing that (and have both been dissing the base in the meantime), I say they should both drop out and give their delegates to Edwards.

That's so British! Oh wait, you're an American.