Why Obama Will Win In Pennsylvania 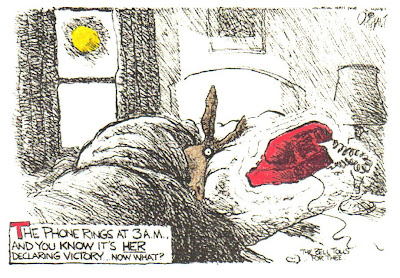 Although most polls show Hillary Clinton leading Barack Obama among likely Democratic voters in tomorrow's Pennsylvania primary, I will once again stick out my neck and join the most accurate poll of the campaign season and predict an Obama victory.

This is because of two reasons: Clinton's relentlessly negative campaigning has drowned out her message for many voters and the expected record voter turnout will skew heavily toward densely populated Philadelphia and suburbs where the Obama campaign got slews of new voters to register. The likely result is that any gains that Clinton makes in her Western Pennsylvania strongholds will be more than offset in the southeast.

It goes without saying that the Clinton campaign will spin any result to a farethewell, even a loss. Dick Polman's hilarious but probably accurate take on how a defeat will be spun:

"We're very pleased with where we are. We always knew that Pennsylvania would be a very tough environment for us. However, we strongly believe – as we have always believed – that the primary results in any state with 12 letters its name, conducted at a point in the calendar when many potential voters are likely to be distracted by baseball games and spring cleaning, should be deemed an inaccurate representation of the electorate's mood, and therefore illegitimate.

"Florida, Michigan, and Pennsylvania are crucial to this party's prospects in November, and therefore we urge Senate Obama to join us in calling for re-votes in all three states. We think this would be an excellent way for Senator Obama to demonstrate his love of America, which of course is unimpeachable, as far as we know. We are confident that Louis Farrakhan, Rev. Wright, and William Ayers will not influence his decision to support a Pennsylvania re-vote.

"But even if Senator Obama retains his negligible national lead after all the re-votes, and after the remaining nine primaries are conducted, we nevertheless believe there should be no rush to judgment, and that the people should be heard. We'd like to see the democratic process play out. Accordingly, Senator Clinton, in the interests of fairness, fully intends to reset the primary calendar and start over. Come June, we'll see you all in Iowa. Iowa, the great state of corn. When Senator Clinton was a child, traveling through Iowa on car trips, she often ate corn . . . "

A final and perhaps unnecessary thought. If you're registered to vote in Pennsylvania, do so early and often.


Apologies to Pat Oliphant for the colorizing
© 2008 Universal Press Syndicate
Posted by Shaun Mullen at 8:11 AM
Email ThisBlogThis!Share to TwitterShare to FacebookShare to Pinterest

Well, I guess it's time to rub it in a little. It seems like Clinton is ahead by 8 points, with rural areas yet to report. Do you think it will be double digits by the morning? Does this qualify as a victory for Obama? It seems that the big O is spinning it that way. I guess he's capable of spin too.

I'm surprised that someone with your background could be so out of touch with a neighboring state. It seems to me that the DN readers form a natural part of Clinton's constituency. You were wrong. Now, my question is whether you were wrong because you sincerely believed he would win in PA, which means you don't know PA, or because you got carried away by enthusiasm for your candidate, which means that your objective reporting skills may not be what they used to be.

I actually agree with you that Obama will probably win the nomination. I'm not happy about that, but I'm not sure it will be terrible. I'm guessing, however, that you would take Clinton's victory for proof that America is filled with idiots.

For me, a lot will depend on who he picks for VP. I'm hoping for Ed Rendell. There's a chance he could win PA with Rendell's help. Let me tell you, though. McCain is very popular here.

Sure PPP has been the most accurate...and I'm the pope. lol

If you look at ALL of their polls and compare them to the larger swath of other's polls, PPP has been ordinary at best, terrible at worst. The truth is they are NOT an independent pollster, they are a Pro-Obama pollster, and their dismal efforts in Pennsylvania has made their hackery clear. Clear if you want to look at it.