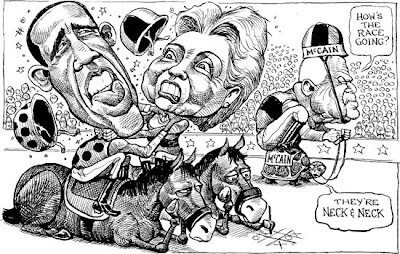 Leave aside the actual merits of the current neocon-Clinton-Limbaugh campaign against Obama - that he's linked to the Weather Underground, that his pastor is a "racist", that he cannot appeal to Reagan Democrats, that he's another McGovern, that he's a closet Communist, etc. etc. What strikes me is the energy with which these pundits actually derive from these associations and debates. It's quite clear that they really anger up the blood of a certain class of people. And yet they don't me, particularly. They seem pretty irrelevant to me, in the context of an election about a major war, a teetering economy, a weakened constitution, a mounting level of debt, a plummeting dollar, and a warming planet. I understand that this is politics, that these are vulnerabilities of associations, that these issues have some traction and a sliver of justification, but I still can't get that worked up about them. Why, I wonder?

When you think about these controversies, you being to realize just how generationally-focused they are. For a lot of people under 40, the Weather Underground sound like an Powers out-take or a rock band. Even if you come to the conclusion (as I do) that William Ayers is a scumbag, the issue is not a dispositive one. Ditto the obvious racial panic around Obama - about Wright, about Farrakhan, about affirmative action.

-- ANDREW SULLIVAN
Everyone is so caught up in the drama of the vs. Obama battle that they’ve overlooked an important political development: Alan Keyes appears to have locked up the Constitution Party's nomination for president.

-- MORBO
thought. Hillary Clinton is not Barack Obama's problem. is Mr. Obama's problem. He has been tagged as a snooty lefty, as the glamorous, ambivalent candidate from Men's Vogue, the candidate who loves because of the great progress it has made in terms of racial fairness. Fine, good. But has he ever gotten misty-eyed over . . . the Wright Brothers and what kind of country allowed them to go off on their own and change everything? How about D-Day, or George Washington, or Henry Ford, or the losers and brigands who flocked to Sutter's Mill, who pushed their way west because there was gold in them thar hills? There's gold in that history.

John McCain carries it in his bones. Mr. McCain learned it in school, in the , and, literally, at grandpa's knee. Mrs. Clinton learned at least its importance in her long slog through , circa 1977-92.

Barack Obama has picked up support from Bruce Springsteen and John Mellencamp, while Will.i.am put one of Obama’s speeches to music. Hillary Clinton appeared alongside Elton John at a concert in her honor, and relies on a Celine Dion song as a campaign anthem.

John McCain, well, at least he has Orrin Hatch.

Perhaps it is a sign of the times, but it strikes me that the country has suddenly found itself bereft of former leaders that carry any kind of broad credibility to weigh in on the serious matters of the day. Whomever is sworn in as president in 2009 will not have much to lean on.

George W. Bush and Dick Cheney are obviously discredited and useless. They'll never be 'elder statesmen' in any sense of the term. The elder Bush still retains a measure of credibility, although his name is tarnished along with his son's. Dan Quayle long ago became a joke. Jimmy Carter has expended his ability to have broad credibility by taking on the highly charged cause of peace in the Middle East. Walter Mondale has never attained a national profile or broad respect. And Bill Clinton has lost his credibility with broad swaths of the left, and never had much cred with the right. The only former leader I can think of that has real clout and respect right now is Al Gore.

Compare this to the sixties, when Dwight Eisenhower and Harry Truman, and even Herbert Hoover, were consulted on a regular basis by Kennedy, and the first two by Johnson. It's appalling how badly our Establishment has failed us, from the media to our Congress to our elder statesmen. It's a sad and dangerous state of affairs.

-- BOOMAN
The best deal for Mr. McCain would be for Mr. Bush to disappear into the witness protection program.

-- FRANK RICH
Bill Clinton had a bad temper ("purple rages" in the words of ex-aide George Stephanopoulos). Richard Nixon had bad temper (yes, he did precipitate Watergate, but he also was balanced enough to open and negotiate arms deals with the Soviets). Dwight Eisenhower had a bad temper, a vein in his forehead would pulsate, and his face would take on the coloration of a hot stove burner (one aide, Merlo Pusey, wrote that "sometimes his anger is aroused and it may set off a geyser of hot words. The President's emotions are close to the surface"). And in my own backyard, we had Mayor Ed Rendell, who once got so ticked at a pesky reporter that he put her head in a hammerlock as he walked down the hall.

I tend to think that most Americans won't be perturbed by the news that McCain cusses out colleagues, given the fact that most Americans probably believe that senators deserved to be cussed out. But a new ABC-Washington Post survey suggests that the Democrats may be able to leverage the temper factor. When people were asked whether McCain's temperament would help or hurt his ability to serve effectively as president, 48 percent said yes and 37 percent said no.

Regarding the NYT story about McCain using his wife's plane for campaign purposes, what took so long? I mean, all of the members of the press's sycophant express have been following him around like needy puppies for months, as commonly repeated reports about McCain "flying coach" floated around.

I hope everyone saw the Bill Moyers interview with Senator Obama's former minister, Jeremiah Wright. From the media coverage and the fiery Youtube video footage--very selectively edited, of course--I was convinced I was going to behold the devil incarnate, right there on pbs. What I found instead was an eminently personable, highly educated and thoughtful individual who kept Bill and the audience spellbound for the whole hour with commentary on the Bible, African-American history, his ministry and congregation, American culture and yes, politics.

We don't really have presidential debates today; we have a kind of meaningless political performance art: a recitation of talking points choreographed to avoid any risk.

In the 2004 election, the Bush-Kerry debate rules ran a full 32 pages of dos and don'ts, including one rule that ordered the moderator to stop any candidate who dared to depart from the script to reference someone in the audience.

The candidates also were ordered to turn over for inspection "all such paper and any pens or pencils with which a candidate may wish to take notes during the debate." Pen and pencils. Talk about the vital stuff of democracy!

In telling contrast, the ground rules for the most famous debates in history were outlined in a two-sentence letter from Abraham Lincoln to Stephen Douglas, his opponent in the 1858 race for the U.S. Senate in . After a prompt exchange of letters, they settled on the terms for seven debates. insisted only that "I wish perfect reciprocity, and no more." There was no talk of pens and pencils.

John McCain has a tough job ahead of him. The Bush kool-aide drinkers are down into the mid 20s. Bush has the highest disapproval rating ever recorded but McCain needs the kool-aide drinkers. St John must distance himself from George W. Bush to win but if he alienates the Bush cultists he can't win anyway even if Hillary attempts to throw the election his way.

. . . Ignore the polls and take charge of the narrative. Act like a leader. Just tell the people how you're going to fix what the GOP has broken. The chattering classes will cluck but they couldn't be more out of touch with the real world. Don't react to your critics, direct the dialogue instead. The average voter doesn't care about the wonkery, they want hope. Make those inspirational speeches again and give them some.

With President Bush currently preoccupied with Iraq, the housing crisis, a recessionary economy, food shortages, record high crude oil prices, the falling value of the dollar against foreign currencies, and an ever-expanding federal budget deficit, another looming crisis has gone quietly unnoticed: the buildup of brush and undergrowth at the president’s private ranch in Crawford, Texas has reached critical levels.