Music As An Instrument of Diplomacy 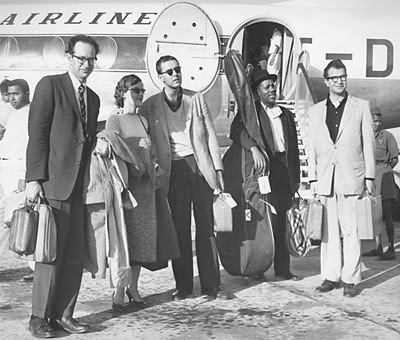 Dave Brubeck (far right) and band on tour in India (1958)
In a serendipitous confluence of feel-goodness, I was waxing nostalgic for the good old days when the U.S. held some semblance of the moral high ground (see post above) when I came across a marvelous talk that Marc Lynch of Abu Aardvark recently gave about the power of music as an instrument of public diplomacy.

This resonated deeply with me because of the pride I felt as a kid when I would see newsreel clips of Louis Armstrong knocking them dead in Moscow or Dave Brubeck bring down the house in New Delhi.

"As a theorist of public diplomacy, I always tend to be skeptical about its immediate, 'moving the needle' prospects – have we gone up three points in our favorable ratings in the new Pew survey? Jazz musicians and rappers are not going to make up for an Administration’s unpopular foreign policy or for the reality of clashing interests. What it can do is to build linkages and connections below the surface, far from politics, where youth around the world find a common language and a common idiom. Perhaps it can allow youth to talk to each other about their own identities, their own issues, in their own way. Perhaps it can build a wider, broader, deeper understanding across cultural divides. And perhaps that’s enough."

Photo: Holt-Atherton Special Collections, Univ. of Pacific Library
Posted by Shaun Mullen at 5:23 AM
Email ThisBlogThis!Share to TwitterShare to FacebookShare to Pinterest