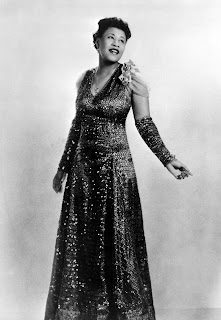 Play an Ella ballad with a cat in the room, and the animal will invariably go up to the speaker, lie down and purr.
-- GEOFFREY FIDELMAN

Like many teenagers, I went my own way when it came to the music my parents played, so I was not particularly moved by their fondness for Ella Fitzgerald and other jazz vocalists.

But as I grew older and my musical horizons expanded, I kept bumping into Lady Ella, mostly as I devoured Duke Ellington albums, and it wasn't too long before I was smitten by this singer with a mountain spring water purity of voice, a three-octave range and extraordinary interpretive powers.

My father especially loved Ella and her "My Man" was his favorite:

It's cost me a lot
But there's one thing that I've got,
It's my man.
Cold and wet, tired you bet
But all that I soon forget,
With my man.

He and my mother finally got to see Ella perform live, and in honor of his birthday she dusted off "My Man" and sang it for him. It was to be his last birthday.

* * * * *
Ella Jane Fitzgerald was born 91 years ago today in , the child of a common-law marriage that fell apart shortly after her birth.

Mother and child moved to , and Ella grew up listening to jazz vocalists like Connee Boswell, whom she idolized. Her life was shattered at age 15 when her mother died. She began doing poorly in school, worked for a time as a lookout at a bordello and for a Mafia-affiliated numbers runner, was sent to and escaped from reform school, which she was beaten, and for a time was homeless at the height of the Great Depression.

Ella made her singing debut at 17 in 1934 at the Apollo Theater in Harlem after her name was pulled out of a hat during an amateur night competition.

Once on stage and confronted with boos and murmurs of "What's she going to do?" from the rowdy crowd, a scared Ella screwed up her courage and asked the house band to play Hoagy Carmichael's "Judy," a song she knew well because of Connee Boswell's rendition. Ella quickly quieted the audience, and by the song's end they demanded an encore.

Within a year, Ella was performing with Tiny Bradshaw's band and then with Chick Webb, who had been reluctant to sign her "because she was gawky and unkempt, a diamond in the rough."

Her first hit songs, among them "Love and Kisses," and one of my faves, "(If You Can't Sing It) You'll Have to Swing It (Mr. Paganini)" brought her acclaim among jazz fans, and after Webb died in 1939 his band was renamed Ella Fitzgerald and her Famous Orchestra with Ella taking the role of bandleader.

She recorded nearly 150 sides during her time with the orchestra, most of which were novelty songs like "A-Tisket, A-Tasket," and to my mind mostly forgetabble and a result of her career lacking direction.

That changed dramatically in 1942 when Ella hired jazz impresario and civil rights activist Norman Granz as her manager, signed with the Decca label and began a solo career that included several hits with the Ink Spots, Louis Jordan, and the Delta Rhythm Boys.

With the demise of the Swing era, and the decline of the great touring big bands, Ella's vocal stylings began to change as she collaborated with Dizzy Gillespie and his big band. She started scat singing, and her 1945 scat recording of "Flying Home" would later be described by The New York Times as:

"One of the most influential vocal jazz records of the decade. . . .Where other singers, most notably Louis Armstrong, had tried similar improvisation, no one before Miss Fitzgerald employed the technique with such dazzling inventiveness."

Her be-bop recordings of "Oh, Lady be Good!" and "How High the Moon" also were popular and cemented her reputation as a leading jazz vocalist.

In 1955, Granz created the Verve Records label to showcase her and she quickly moved into the musical mainstream with the release of her landmark 1956 album, Ella Fitzgerald Sings the Cole Porter Songbook.

"I had gotten to the point where I was only singing be-bop. I thought be-bop was 'it', and that all I had to do was go some place and sing bop. But it finally got to the point where I had no place to sing. I realized then that there was more to music than bop. felt that I should do other things . . . It was a turning point in my life."

Seven other songbook albums spotlighting composers and lyricists would follow over the next eight years and taken together are a cornerstone of the Great American Songbook. Ella Fitzgerald Sings the Duke Ellington Songbook (1957) is my hands down favorite Ella album and the only Songbook on which the composer she interpreted played with her.

She also did many collaborative albums, including those with Louis Armstrong, Count Basie and . A long planned album with Frank Sinatra, with whom she appeared on stage, never materialized.

After the Verve label was sold to MGM in 1963, Ella's contract was not renewed and she recorded for several labels until Granz founded Pablo Records in 1972. She recorded some 20 albums for the label that sadly documented the inevitable decline in her voice, which grew harder and forced her to use shorter, stabbing phrases. Plagued by health problems, Ella made her last recording in 1991 and her last public performances in 1993.

During a 60-year career, Ella sold over 40 million albums, performed 26 times at Carnegie Hall and won 13 Grammy awards. She would have to be considered the most popular female jazz singer on that basis alone.

Ella was painfully shy in public and even among friends, but on stage she was fearless.

There was a flawlessness to her voice and her command of scat was incredible considering that she made up the phrasings as she went along, but never stumbled over or repeated them. I gave yet another listen to her Songbook album with Ellington as I wrote this and was blown away yet again by her grasp of beat and harmony.

Following Ella's death in 1996 at age 79, Times columnist Frank Rich wrote that she:

"[P]erformed a cultural transaction as extraordinary as Elvis's contemporaneous integration of white and African-American soul. Here was a black woman popularizing urban songs often written by immigrant Jews to a national audience of predominantly white Christians."


My mother lived another 19 years following my father’s death, and among the tapes I made for her to listen to as her health failed and she became bedridden were some of the very same Ella songs that they had listened to in my youth.

The dreaded call came from my sister on a warm June evening. My mother had died. I threw on some clothes and bounded out to the car and drove off to the nursing home.

My radio was set to my favorite jazz station, and I find it hard to believe that it was merely a coincidence that Ella Fitzgerald's "My Man" came on.

* * * * *
This is the fifteenth in a series of appreciations of the people who have moved and inspired me over the years. It is based in part on the Wikipedia entry on Fitzgerald.
Previous appreciations have included Duane Allman, Hoagie Carmichael, John Coltrane, Aaron Copland, Jerry Garcia, Bill Graham, Stéphane Grappelli, Learned Hand, Jack Kerouac, Ron "Pigpen" McKernan, Bob Marley, Laura Nyro, Eleanor Roosevelt and Tennessee Williams.