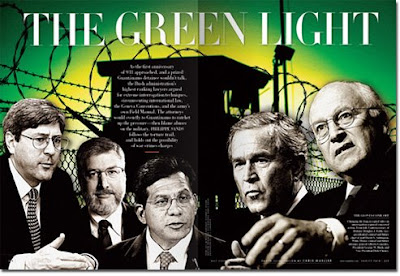 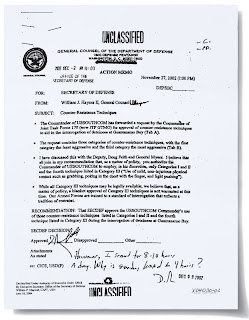 It had been widely assumed that the decision to torture enemy combatants and other detainees in the so-called War on Terror began with military commanders and interrogators at Abu Ghraib prison in . The Bush administration has taken refuge behind this "trickle up" explanation, but as is now apparent, the origins of this dark chapter in American history -- and the single most defining aspect of the Age of Bush -- can be traced to the very highest levels of government.

That is the conclusion of "The Green Light," a scrupulously researched and horrifying article in the current Vanity Fair magazine by Phillippe Sands, who follows the torture trail and asks whether war crimes were commited.

On a table before us were three documents. The first was a November 2002 "action memo" written by William J. (Jim) Haynes II, the general counsel of the U.S. Department of Defense, to his boss, Donald Rumsfeld; the document is sometimes referred to as the Haynes Memo. Haynes recommended that Rumsfeld give "blanket approval" to 15 out of 18 proposed techniques of aggressive interrogation. Rumsfeld duly did so, on December 2, 2002, signing his name firmly next to the word "Approved." Under his signature he also scrawled a few words that refer to the length of time a detainee can be forced to stand during interrogation: "I stand for 8–10 hours a day. Why is standing limited to 4 hours?"

The second document on the table listed the 18 proposed techniques of interrogation, all of which went against long-standing military practice as presented in the Army Field Manual. The 15 approved techniques included certain forms of physical contact and also techniques intended to humiliate and to impose sensory deprivation. They permitted the use of stress positions, isolation, hooding, 20-hour interrogations, and nudity. Haynes and Rumsfeld explicitly did not rule out the future use of three other techniques, one of which was waterboarding, the application of a wet towel and water to induce the perception of drowning.

The third document was an internal log that detailed the interrogation at Guantánamo of a man identified only as Detainee 063, whom we now know to be Mohammed al-Qahtani, allegedly a member of the 9/11 conspiracy and the so-called 20th hijacker. According to this log, the interrogation commenced on November 23, 2002, and continued until well into January. The techniques described by the log as having been used in the interrogation of Detainee 063 include all 15 approved by Rumsfeld.

* * * * *
Where had the initiative come from? The administration pointed to the military commander at Guantánamo, Major General Michael E. Dunlavey. Haynes would later describe him to the Senate Judiciary Committee, during his failed confirmation hearings for a judgeship in 2006, as "an aggressive major general." The techniques were not imposed or encouraged by , which had merely reacted to a request from below. . . . The official version was clear: Haynes and Rumsfeld were just processing a request coming up the chain from Guantánamo.

* * * * *
Douglas Feith had a long-standing intellectual interest in , and for many years had opposed legal protections for terrorists under international law. He referred me to an article he had written in 1985, in The National Interest, setting out his basic view. provided incentives to play by the rules; those who chose not to follow the rules, he argued, shouldn’t be allowed to rely on them, or else the whole structure would collapse. The only way to protect , in other words, was sometimes to limit its scope. To uphold ’s protections, you might have to cast them aside.

But that way of thinking didn’t square with the system itself, which was based on two principles: combatants who behaved according to its standards received P.O.W. status and special protections, and everyone else received the more limited but still significant protections of Common Article 3.

Not everyone at Guantánamo was enthusiastic. The F.B.I. and the Naval Criminal Investigative Service refused to be associated with aggressive interrogation. They opposed the techniques. One of the N.C.I.S. psychologists, Mike Gelles, knew about the brainstorming sessions but stayed away. He was dismissive of the administration’s contention that the techniques trickled up on their own from Guantánamo. "That’s not accurate," he said flatly. "This was not done by a bunch of people down in Gitmo—no way."
The Phifer Memo identified the problem: "current guidelines" prohibited the use of "physical or mental torture, threats, insults, or exposure to inhumane treatment as a means of or aid to interrogation." The prohibition dated back to 1863 and a general order issued by Abraham Lincoln.

The list of new interrogation techniques turned its back on this tradition. The 18 techniques were divided into three categories and came with only rudimentary guidance. No limits were placed on how many methods could be used at once, or for how many days in succession. The detainee was to be provided with a chair. The environment should be generally comfortable. If the detainee was uncooperative, you went to Category I. This comprised two techniques, yelling and deception.

If Category I produced no results, then the military interrogator could move to Category II. Category II included 12 techniques aimed at humiliation and sensory deprivation: for instance, the use of stress positions, such as standing; isolation for up to 30 days; deprivation of light and sound; 20-hour interrogations; removal of religious items; removal of clothing; forcible grooming, such as the shaving of facial hair; and the use of individual phobias, such as the fear of dogs, to induce stress.

Finally came Category III, for the most exceptionally resistant. Category III included four techniques: the use of "mild, non-injurious physical contact," such as grabbing, poking, and light pushing; the use of scenarios designed to convince the detainee that death or severely painful consequences were imminent for him or his family; exposure to cold weather or water; and waterboarding. This last technique, which powerfully mimics the experience of drowning, was later described by Vice President Cheney as a "dunk in the water."
* * * * *
The abusive interrogation of al-Qahtani lasted a total of 54 days. It ended not on January 12, as the press was told in June 2004, but three days later, on January 15. In those final three days, knowing that the anything-goes legal regime might disappear at any moment, the interrogators made one last desperate push to get something useful out of al-Qahtani. They never did. By the end of the interrogation al-Qahtani, according to an army investigator, had "black coals for eyes."
* * * * *
Those responsible for the interrogation of Detainee 063 [al-Qahtani] face a real risk of investigation if they set foot outside the . Article 4 of the torture convention criminalizes "complicity" or "participation" in torture, and the same principle governs violations of Common Article 3.

It would be wrong to consider the prospect of legal jeopardy unlikely. I remember sitting in the House of Lords during the landmark Pinochet case, back in 1999—in which a prosecutor was seeking the extradition to Spain of the former Chilean head of state for torture and other international crimes—and being told by one of his key advisers that they had never expected the torture convention to lead to the former president of Chile’s loss of legal immunity. In my efforts to get to the heart of this story, and its possible consequences, I visited a judge and a prosecutor in a major European city, and guided them through all the materials pertaining to the Guantánamo case. The judge and prosecutor were particularly struck by the immunity from prosecution provided by the Military Commissions Act. "That is very stupid," said the prosecutor, explaining that it would make it much easier for investigators outside the United States to argue that possible war crimes would never be addressed by the justice system in the home country—one of the trip wires enabling foreign courts to intervene. For some of those involved in the Guantánamo decisions, prudence may well dictate a more cautious approach to international travel. And for some the future may hold a tap on the shoulder.

"It's a matter of time," the judge observed. "These things take time." As I gathered my papers, he looked up and said, "And then something unexpected happens, when one of these lawyers travels to the wrong place."