The Last American Army in Vietnam 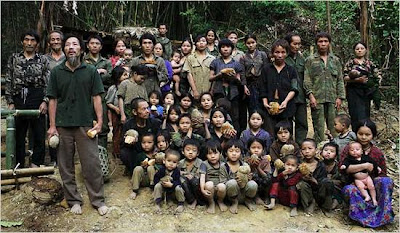 AMERICA'S FORGOTTEN WARRIORS AND THEIR FAMILIES
One of the ongoing tragedies of the war is 's refusal to allow Iraqis who have actively helped the American effort into the in all but the smallest numbers, exposing them to possible persecution and death.

The fate of many of the Hmong mountain people who fought against the communist-nationalist Pathet Lao in at the behest of the CIA on one of the more obscure fronts in the Vietnam War was somewhat better. After the Pathet Lao victory in 1975, thousands fled to and many were resettled in Western countries, including the

But now those Hmong allies who remain in are being hunted down and exterminated by Laotian and Vietnamese military units, according to a Center for Public Policy analysis.

Richard Fernandez, better known as Wretchard the Cat at the Belmont Club blog, writes at Pajamas Media that:

"The Lao Peoples Democratic Republic (LPDR) regime, in cooperation with the Socialist Republic of Vietnam (SRV), has issued a new order and drafted a comprehensive strategy to mount a major military offensive to exterminate thousands of Hmong in hiding in the jungles and mountains of Laos. The offensive will involve special battalions of troops and special operations commandos from who are now being deployed to the closed military zones of operation. The reported object is to eliminate and exterminate some 15,000 Lao Hmong in hiding in key areas of by the end of April 2008. Hmong in are bracing for these new anticipated attacks by and , which are expected to be massive and ruthless."

The Laotian government views the Hmong as "bandits," denies that there is a campaign of persecution against them and predictably rejects calls for independent international monitors as "interference from the outside."

It's hard to see the Bush administration leaning on the Laotian and Vietnamese governments considering the attitude that it has copped regarding Iraqi civilians and its lousy human rights record overall.

Complicating the situation is that the use of the Hmong mercenaries was secret.

Unlike in , the 's involvement in was covert (and highly illegal) and no American troops were sent to try to prevent a Communist takeover. But while the war is a sad chapter in American history that many people would sooner forget, Americans have an obligation to not forget the Hmong.

No thanks to Obama's new friends. Why is it so easy to point out our own failings, and so hard to admit that we were fighting true evil in Vietnam?