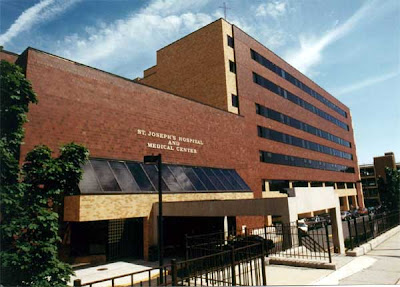 St. Joseph's in Paterson would lose millions for charity care under Governor Corzine plan that would force some hospitals to close.

There is 's health-care system is in crisis and that extends to all 50 states. But if you want to see where hospitals may find themselves sooner or later, consider the number of hospitals in that have closed or are on life support and how Democratic politicians have put themselves in a straightjacket that is exacerbating this perilous situation.

, the most densely populated and second wealthiest state, had 112 hospitals 20 years ago. Today it has 74 after six closed in the last 18 months. Meanwhile, four others have announced plans to close and five filed for bankruptcy protection, with about half of the others losing money like an ER patient hemorrhaging blood because of gunshot wounds.

Hospitals should be no more immune to the effects of bad business practices than any other enterprise, and indeed some of the closings are the result of lousy management, including a failure to remain competitive, as the industry lurches away from community-based facilities to those where making profits for shareholders trump all other concerns.

New Jersey hospitals are not merely just another business, but are the key component of a health-care system that is deeply stressed because of, among other things, a growing nursing shortage, rapacious insurance companies and an economy that has forced more people to rely on hospitals because they cannot afford to go to family physicians for even the simplest ailments.

But the biggest reason for s hospital crisis is that the state is cutting way back on funding for them.

Just the other day, state health chief Heather Howard, carrying Governor Jon Corzine's water, warned lawmakers that the state may need "to let" some hospitals close to strengthen others in order to improve the industry's financial woes.

"Unfortunately, because we have too many beds, some hospitals may need to close and when a hospital closes it may make other hospitals stronger in that area," Howard said during a Senate budget hearing. "In some cases we may need to let market forces take effect, which may mean hospitals will close, and what our job is to make sure that we're saving the safety nets and preserving access."

The state's unusual way of providing that safety net will be to cut aid to hospitals by 14 percent as part of $2.7 billion in Corzine-mandated budget cuts to try to reduce the state deficit, high debt and taxes.

Much of the cut would come from money provided by the state to help treat its 1.5 million uninsured residents. Translation: New Jersey will try to balance its budget on the backs of people already struggling to make ends meet, and urban hospitals like St. Joseph's Regional Medical Center in Paterson would be hit hardest.

Although Corzine has said that he plans to set aside $35 million to help sustain so-called "safety net" hospitals, the New Jersey Hospital Association estimates the cuts would mean no state aid for 26 hospitals and less aid for 37 of the remaining 74.

"We fear the ultimate losers will be New Jersey's residents, many of whom will see more hospital closures, job cuts and service reductions in their communities," said Betsy Ryan, the association's chief operating officer.

The elephant in this particular room, and one that virtually no one wants to talk about, is the Democratic majority's pathological fear of anything to do with taxes.

When it comes to taxes, which in New Jersey are among the highest in the nation, residents have long memories and short tempers: The Democrats' hold on the statehouse was broken in 1994 when Governor Jim Florio was defeated by Christie Todd Whitman after he raised taxes and cancelled a property tax break.

Most political power in the state is at the local level because of the so-called freehold system, while entrenched moneyed interests pretty much have a stranglehold on public policy.

As Kathy G. notes at The G Spot, straightening out the health-care mess will require increasing taxes and weakening corporate power. But even with a Democratic majority in and probably , as well, Democrats lack the will to fight for programs that will cost money.

What Heather Howard and other New Jersey bureaucrats don't say and fail to recognize is that there are too many hospital beds because there aren't enough nurses, and cutting more holes in the so-called safety net jeopardizes the health care of all New Jersey residents.

This, of course, excludes Corzine, who got premier care at one of the state's top trauma centers after his speeding state police-chauffeured SUV crashed and he broke numerous bones because he was not wearing a seat belt.

Tell the GOP bosses that sick workers reduce profits and that they also pay no taxes. That confounding info will have them scratching their "let them eat under bridges" noggins.

You ignored the main reason for the closures: The government. Medicaid pays 70 cents for every dollar's worth of service. Those costs are passed along to those "rapacious insurance companies." ERs are overused by Medicaid Patients and ERs lose money. The poor management is at teh government level. Gov. Jon Corzine's plan is disastrous yet you blame the victims: The hospitals.

While I would bow to your wisdom in many other areas, I may be a little more knowledgeable about the situation in New Jersey.

Everything you say is correct but is not the whole picture. Hospitals must share much of the blame for allowing a burgeoning nursing shortage to morph into a full-blown crisis that in turn blows back on virtually every aspect of health care.

I do not suggest that there would not be big problems without a nursing crisis, but those empty beds are camouflage for what the bureaucrats won't say and fail to recognize: There aren't enough nurses and cutting more holes in the so-called safety net jeopardizes the health care of all New Jersey residents.