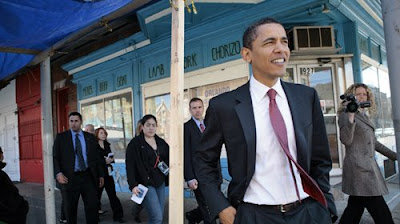 The flip flop is a staple of politics as usual. Here’s a fresh example, starring Barack Obama:

A mere five months ago, in Iowa, Obama didn’t like it when outside "special interest" groups sided with his rivals, pumped their own money into the campaign, and ran independent ads against him. Most of those groups were actually affiliated with organized labor – and three quarters of the money came from labor - but he didn’t cut them any slack.

. . . Fast forward to the primary, present day . . . and the news that SEIU and an affiliated health-care local union are pouring upwards of $1 million into an independent pro-Obama effort that parallels the official Obama operation. Nothing illegal about that, then or now. The issue here is the difference between Obama’s stance, then and now.

At times like these, I am tempted to send this message to his ardent devotees: Let us all remember, this guy does not walk on water. He"s a politician who is trying to win, and he will flip where he once flopped if that's what it takes.

Public approval of President Bush has dipped to a new low in the Associated Press-Ipsos poll, driven by dissatisfaction with his handling of the economy.

Moody's (MCO) is one of the key enablers in the housing crisis and the sub-prime debacle. Considering the massive damage they are at least partially responsible for, they have escpaed been relatively unscathed -- so far. Their reputation is in tatters, and their stock price is down, but given the culpability, payola, and gross incompetence, one might have thought an Arthur Anderson-like demise was a possibility.

I had forgotten that Warren Buffett was Moody's biggest shareholder; he should consider himself lucky that Moody's situation hasn't tarnished his reputation, either.

The mandate holders now fear the next president will face a quagmire in Iraq. They should. No cruel Capitol Hill quagmire jokes, please. Until they face the reality that war must be fought to win, and we have the strategy in place to do that, the kind of pandering half measures Clinton or Obama are likely to take are guaranteed to produce quagmire in Iraq. Unless they go ahead with utter abandonment, in which case quagmire rapidly becomes debacle.

When the history of the Hillary Clinton campaign is written — win or lose — a special chapter will be devoted how Bill Clinton, a one time savvy politician, evolved into a tin-eared political operative who did more damage to his wife than help her when he opened his mouth at key points during her campaign. His latest is in singlehandedly reviving Hillary Clinton’s embarrassing account, which was totally contradicted by videos shown on broadcast news, cable news, you tubes and posted on countless websites. She later said she “misspoke” — and never recovered in most polls.

Project Vote Smart, the nonpartisan voter-education nonprofit, confirms today that it has kicked John McCain off its board. Mother Jones reported on Monday that PVS was prepared to make the move due to McCain’s nine-month refusal to fill out its Political Courage Test. According to PVS President Richard Kimball, the nonprofit has a rule that bars nonrespondents from serving on its board.

PVS contacted the McCain campaign 25 times from June 2007 to February 2008 in the hopes of avoiding the embarrassment this move entails for both the organization and one of its long-time board members. Eventually, however, they were simply left with no choice. The senator who made his career on straight talk couldn’t spare some for the organization he served.

The House adopted a rules change Thursday that freezes the free trade agreement by waiving a requirement that Congress act on it within 90 days. The rule passed mostly along party lines . . . House Speaker Nancy Pelosi (D-Calif.) said Congress and the White House must first enact policies to help the faltering U.S. economy before approving the Colombia pact.

My own view and distinct recall of the passage of the Military Commissions Act is that McCain blinked - and is still blinking in the face of massive pressure from the torture-wing of the GOP, which has at its center the vice-president's office. Largely, I think McCain's stand has been admirable; but it would not be intellectually honest to describe it as steadfast. Maybe if he gets to be president, this nightmare will end. But his legislative actions have ensured legal immunity for the civilian war criminals and the possible continuation of torture under Cheney's and Bush's extra-legal rule.

Suddenly public opinion results show John McCain leading Barack Obama as well as Hillary Clinton, and they recall the numbers of a year ago when Rudy Giuliani was beating every Republican in sight and Clinton was on her way to a coronation on the Democratic side.

In this long, long pre-election season, the pollsters and pundits should try harder to distinguish between near-term sentiment and electoral viability. Last year's wide Giuliani and Clinton leads turned out to be more about name recognition and TV-like familiarity ratings than serious thought about who would make the best president.

Isn't the current McCain bounce more about the fallout from the Obama-Clinton mud-fighting than about a sudden desire on the part of voters to see McCain in the White House? Have they fallen in love with him or are they just irritated by super-delegates, , and other Democratic follies? Do these figures mean anything more than last year's did?

On the presidential election calendar, April often marks the start of the silly season. April is typically a time for silly stories that come and go within the space a single news cycle (bulletin: a talk-radio loudmouth calls John McCain a "warmonger" - and refuses to apologize!), and silly stories that linger for awhile until people come to their senses (April, 1992: a semi-loon named Ross Perot is the top choice for the presidency, beating Bill Clinton and George H. W. Bush in the polls).

So it's in the spirit of silliness that today I linger briefly over this week's silliest - and most hilarious - April story: the chatter about Condoleezza Rice showing some interest in the number-two slot on John McCain's Republican ticket. If I hadn't been tracking the stories all week long, I would have sworn that the whole thing had been crafted by Bill Maher's gag writers as some kind of cosmic joke.