The GOP Crime Spree Against America 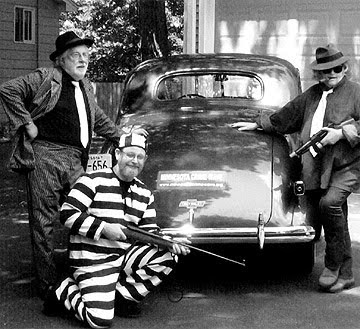 It’s time to cut to the chase. Forget about the talking points, slide shows, sound bites and photo opps. The Republican Party has unleashed a crime spree against Americans that is astonishing for its audacity and sheer meanspiritedness, and there is no end in sight.

You can now add extortion to robbery (see the post above) and rape.

Yes, extortion. This is because the looming government shutdown is not about fiscal policy, deficit reduction or reining so-called entitlement programs. It is about Republicans shutting down your government unless Democrats cave in and:

* Block local financing for abortion services in the District of Columbia.

* Provide no foreign aid of any kind to countries that might use the money for abortion or family planning.

• Defund the new consumer protection bureau established in the wake of the financial collapse resulting from the Bush Recession.

The pathology of the Republican trigger men leading the crime spree is beyond obvious: An overarching sense of entitlement masquerading as a mandate that is fed by the sense of grievance and self pity that pervades the Tea Party and the self-righteousness that compels Christianists to demand that their beliefs be imposed not just on Americans, but its needy friends abroad, as well.

It matters not a whit to these thugs in pinstripes that the consequences of a government shutdown include GIs in Afghanistan and Iraq missing paydays, GIs in post-nuclear catastrophe Japan losing access to bottled water when base exchanges close, government-funded health clinics and national parks shutting down, and benefit and disability checks — lifelines for millions of Americans — being delayed.

To riff off the late great Pogo, Americans have met the enemy and it is the Republican Party.

Why didn't the Dem's pass a budget last year before the Republicans took over? They failed 6 months ago and this would be a non-issue if they had done their jobs. I'm not defending the Republicans, they are just as bad as the Democrats are. One look at the games both sides play is proof that a two party political system is more counterproductive than it is beneficial to the ones who are ultimately effected by their lack of urgency: us citizens. Extend and pretend while putting off decisions until they are no longer relevant. I don't see how anyone can defend either side with the state this country is currently in when it is being led downhill by both parties and has been for a long time. Point fingers, play the blame game and worry about keeping voters on their side, the issues can be dealt with after elections...if they have time.

While I think you are simplifying things a bit, you are correct that the Democrats are not blame free.

The difference here is that for the most part the Democrats want to protect the Have A Little Somethings and the Have Nots, while the Republicans want to coddle the wealthy and big business.

Why didn't the Dems pass? Because they didn't have 60 votes in the Senate. Lieberman also sided with the Republicans on preserving tax cuts for the rich. Reid does not have the strength to enforce Dem discipline in the Senate.

Dems need a new Senate leader. Durbin might be better.