Yo Global Warming Deniers: If The Galt Shoe Fits Then By All means Wear It 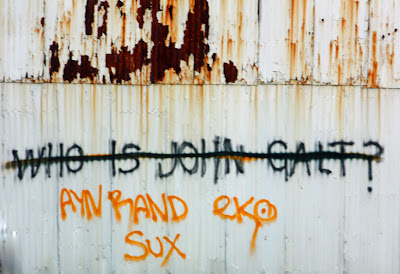 There were two literary sensations during my college years -- J.R.R. Tolkein's Lord of the Rings and Ayn Rand's Atlas Shrugged. I took to Tolkein like a fish to water, but even my work-in-progress intellect recoiled at Rand's belief system, which she called Objectivism and I called deeply flawed.

Fast forward 40 years and Rand is back in fashion. Or perhaps never fell completely out of fashion for people, typically conservatives, often libertarians and consistently selfish, it would seem, who crave pat answers to simple questions. Objectivism is all that and more in a neatly wrapped package with a big bow.

Objectivism holds that one can attain objective knowledge through processes of concept formation and inductive and deductive logic. Getting beyond that cosmic debris, Rand's core belief was that the proper moral purpose of one's life is the pursuit of their own happiness, which she called rational self-interest, and that laissez faire capitalism should be the coin of the realm.

The big problem with all of this, which I was unable to grasp at the time but now finally understand in my semi-dotage, is that Rand and her acolytes tried and try to justify their behaviors through this belief system, which makes for some spectacularly odd square-peg-into-round-hole fits.

A pungent, if extreme example, of this is hammered home by a commenter at Andrew Sullivan's Daily Dish who notes that Rand eventually (and I would add inevitably) became her own villain:

"This is because she needed to justify her every action through her philosophy, including her need to bang Nathaniel Branden while her husband not only accepted the infidelity, but remained monogamous himself.

"This is the reason why her characters in Atlas Shrugged behave in such inhuman ways. Dagny just drops Hank Reardan, whom she had been having a torrid love affair with, because John Galt is so much smarter and better than him. She tells him as much. And Hank is not only supposed to accept this betrayal without feeling the least bit sad or upset about it, but he's supposed to totally understand and still remain friends with Dagny. He'd be the jerk if there was any weirdness or jealousy.

"Of course this is completely ridiculous."

This begins to explain why so many conservatives do not believe in global warming and science in general.

When you have an unshakable belief in your own little world -- that cow farts are responsible for greenhouse gases and, by the way, the EPA should not be allowed to regulate them -- you are not going to embrace the science that has proven human involvement beyond a doubt.