The Week That Never Should Have Been 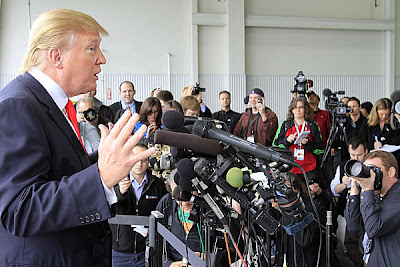 America is slouching toward the end of what has to be the strangest -- as well as saddest -- week in memory.

It was a week in which President Obama, responding to the short-form birthers who have nipped at his heals for three years, was compelled to belabor the obvious by producing his long-firm birth certificate, while the television news media, which has squandered its credibility in such a thoroughgoing fashion, broke into regular program to carry live the blatherings of the barking maddest of the barking mad of the Republican lunatic fringe, who took credit for the president’s action.

Save perhaps for breaking away to carry live a radio speech by Hitler or Mussolini in the run-up to World War II, there is no such precedent in American media history. It was like going live to one of Bishop Coughlin’s radio speeches in the 1930s because the fascist cleric was expected to attack Jewish bankers.

Even the weather gods seemed especially roiled as violently deadly weather pounded two-thirds of the country. It would not have been all that surprising if the Capitol dome had blown off. Oh, wait a minute, it’s only Thursday.

Let’s be absolutely clear that when questions were first raised in 2008 about whether Barack Obama was American born, they were appropriate. Indeed, similar questions were raised about John McCain. But both candidates soon produced the necessary documentation to show that they were born in Hawaii, in Obama’s case, and in the U.S. Canal Zone in Panama, as was the case with McCain.

But the questions about Obama did not end there and instead have grown exponentially, sucking in true believers like the latest cure for erectile dysfunction. Today fully half of Republicans, according to some polls, believe that Obama has lied and forged his way into covering up his "true" place of birth — Kenya — and be rest assured that most of these minds (a generous use of the term to be sure) will continue to feel the same way. For them, it is never time to move on, and Obama's legitimacy will be questioned until the day he leaves office. (That would be January 20, 2017.)

To say that this is dog-whistle politics does injustice to dogs everywhere. It is racist at its soulless core and no amount of pretzel logic from Tea Party mouthpieces or conservative talk show shouters will change that.

Meanwhile, like flies attracted to the steaming fecal pies that litter cow pastures, one GOP presidential wannabe after another has covered themselves with those steaming fecal pies as they climbed onto the birther bandwagon, but none as enthusiastically as the vulgar fraud with the double comb-over at whose feet the television news networks grovelled in breaking into their programming to cover his news conference in the "battlefield state" of New Hampshire.

There is a case to be made that Obama should have let the birther madness rave on, and some pundits believe that he set a trap that the Republicans willingly walked into. After all, this brand of gotcha politics was roiling an already distracted GOP that a mere 14 weeks after taking over the House finds itself on the defensive because of its plan to close the budget deficit by kneecapping the middle class and poor and rewarding the rich with new stretch limousines. Ironically, theirs is a solution that not even birthers can abide.

But Obama proved himself yet again to be presidential. The U.S. is in crisis, and not because its leader has a funny name and the flames of racism were being further fueled by birthers. He had to throw water on the fire and turn our collective attention back to where it belongs.

Too bad that many Republican and their television news media helpmates will not be doing so. After all, there are questions about how Obama got into two Ivy League schools and became editor of the Harvard Law Review since the man with the double comb-over claims he got such lousy grades in high school.

Worry not, America, because he's on the case.