Science Sunday: Resetting The Clock On When The First Americans Arrived 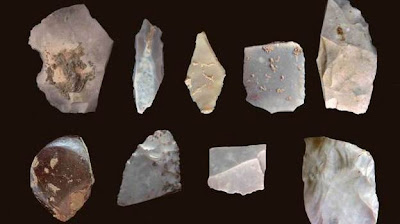 BUTTERMILK RANCH TOOL FRAGMENTS
A newly excavated site in central Texas has revealed evidence that the first human settlers in the North America arrived more than 15,000 years ago, more than 2,000 years earlier than scientists originally thought, and they may have migrated by watercraft and not across the Bering Sea Bridge.

Until the discovery, it was long thought that a culture know as the Clovis people were the first to settle in the Americas sometime between 13,000 and 12,800 years ago. The people are named for the New Mexico town near where their tools were first found in the 1930s.

The Texas site is on Buttermilk Creek, north of Austin, and archaeologists say there are plenty of reasons why these ancients would have camped here.

"First off, you have a small spring-fed stream, which has water in it year-round, which is pretty good for Texas," says Michael Waters, director of the Center for the Study of the First Americans at Texas A&M University. "You can go north to the Blackland Prairie, you can stay in the Edwards Plateau, you can go south and head out into the Gulf Coastal Plain, and there you have various animal and plant resources at your fingertips."

Another advantage is that there is plenty of chert nearby -- a kind of quartz that can be used to make sharp blades. Waters knows early humans spent time at the spot because he's found more than 15,000 artifacts, mostly the small flakes or chips that are left behind from the making of stone tools and the resharpening of them.

What makes these tools particularly interesting is they come from a layer of soil that's below the level where Clovis tools have been found. Those tools were made by people know as Clovis.

Tom Dillehay, a professor of anthropology at Vanderbilt University, says there's been a long running debate about whether Clovis were really the first American settlers, and he's not certain the findings from Buttermilk Creek will settle the issue.

"Whether or not they are pre-Clovis or early Clovis is somewhat, I think, questionable," he says. Dillehay says it will take more excavating and better dating techniques to settle that question.

But there are now several sites that point to human settlement in the Americas earlier than Clovis.

"This particular report that just appeared, if you want to put it that way, is just another nail in the Clovis coffin," says James Adovasio, the executive director of the Mercyhurst Archaeological Institute. He's done his own excavating at a site near Buttermilk Creek.

While the first humans to claim real estate in North America probably weren't Clovis, he says, scientists just don't know who they were.

"Everything we're learning now -- from genetics, from linguistic data, from geological data, from archaeological data -- suggests that the peopling process is infinitely more complicated than we might have imagined 50 years ago, or even 20 years ago," he says.

The discovery could change thinking about how people got here, with some scientists now leaning toward coastal migrations along shores and in boats.