Baldness As A Badge Of Honor 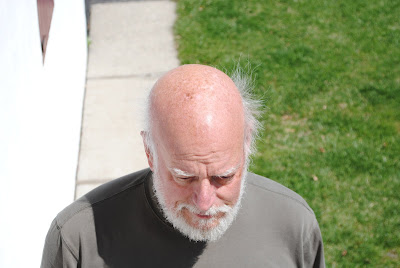 YOUR FAITHFUL CORRESPONDENT'S DOME
Among the viscissitudes with which we males have to contend is whether we will go bald. Roughly 25 percent of us begin balding by age 20 and two-thirds begin balding by age 60. There is a 4 in 7 chance of getting the baldness gene, and boy do I have the baldness gene.
That seems to be a cause for lament among many men judging from all of the adverts for Rogaine and other hair restoration products, and it would seem that the loss of one's hair marks a man as being socially inferior, at least in his own eyes, which is to say less attractive, hence less sexually appealing and damaged goods as mating material.

It should be noted that there has not been a bald president since Eisenhower and there hasn't been a bald Hollywood leading man since Yul Brynner, who reached the top while Ike was running the show. In fact, JFK, Reagan and Clinton had magnificent heads of hair, while it is hard to imagine a bald George Clooney, Johnny Depp or Eddie Murphy being huge box office draws.

I have never understood why being bald was such a big deal for so many men because I have worn my baldness as a badge of honor and cannot recall a social situation, aside from some male-to-male post-adolescent teasing, where my lack of hair has been a problem socially or occupationally, although I should acknowledge that I never aspired to be a TV news talking head.

I was well on my way to becoming bald in my late teens, which had the effect of my appearing to be older, which in turn enabled me to buy beer for my buddies and myself while still being underage. A huge attribute at the time if silly in retrospect. My father and grandfather were bald as billiard balls, but both were very handsome men and fine role models.

Then there is the fact that I have never lacked for female companionship, which is to say sex. While I was seldom in love over the years, I often was in lust, and while sparing you the details because Kiko's House is a family blog, suffice it to say that I have never had trouble getting laid. Or having to pull my hair out of my eyes while driving in an open car.

Seneca perhaps said it best: "I don't consider myself bald, I'm just taller than my hair."

I use a #2 blade when I cut my hair and it drives both of my balding brothers nuts. Of course mom and I had nicely shaped heads and could wear short hair and get away with it. They had odd bumps.

It cracks me up how many young men shave their heads and how many older ones have comb overs.

The Donald is the personification of the older guy comb over. In fact, I have read an article that explains and shows that he has a double comb over.

While I am bump free, like my father before me I cannot do any kind of work in close quarters without whacking my head, hence numerous scars.

Like you I started balding at about 20. After I graduated from college in 68 I found myself in the Army. Three years later the process was complete. It took me a few painful experience to discover that I had to wear a hat when out in the sun.