The Republican Heart Of Darkness 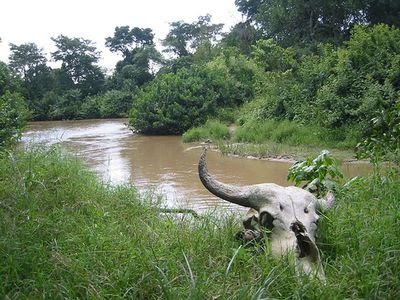 I felt an intolerable weight oppressing my breast, the smell of the damp earth, the unseen presence of victorious corruption, the darkness of an impenetrable night.
~ "Heart of Darkness," JOSEPH CONRAD
It has been over two years since Republicans last "governed," and that term should be used advisedly since the leadership styles of George Bush and Dick Cheney would hardly be recognizable to most of their executive branch forebears: A toxic combination of demagoguery, hubris and obfuscation that stole a march on FDR's most famous words: "We have nothing to fear but fear itself."

And fear is one factor in polls showing that pre-2010 election support for Republicans among all-important independent voters has evaporated. One poll reveals that independents would vote Democratic for the House by a 42-33 percent margin, a 28 point reversal in a mere five months. The reason? Many independents, a goodly number of whom said Democrats were taking the country in the wrong direction, now believe that the Republicans are doing so.

Those fears are encapsulated neatly, if unintentionally, in the Republicans' multi-trillion dollar plan to eliminate the federal budget deficit by taking from the poor and giving to the rich while freeing Wall Street of regulations and oversight.

This chicanery begs a question that is central to the GOP's present and its future: Why would a party that once proudly referred to itself as The Big Tent unashamedly embrace scaring the bejeezus out of people as a way to govern? Think death panels. Think re-education camps. Think Soviet-style rationing. Think President Obama not being a U.S. citizen.

The answer, I believe, has less to do with the party being bereft of policymakers as lacking a diversity of voices that characterize the Democratic Party, although those voices can often sound like players in a food fight.

No policy proffered by a Republican today stands a chance if it doesn't pass Tea Party and Christianist purity tests because it is those fringe groups who are the tail that wags the Republican elephant. As it is, the Tea Party bloc in Congress is refusing to go along with House Minority Leader John Boehner's compromise with the White House that adverted a government shutdown, while it suddenly seems within the realm of possibility that the Democrats will take back the House in 2012, their fecklessness notwithstanding.

Oh, and check out the line-up for the first Republican presidential debate on South Carolina on May 5: Newt Gingrich, Buddy Roemer, Ron Paul and Tim Pawlenty. All have one thing in common: They're not even remotely unelectable.

Ronald Reagan famously remarked "Stick with your folks." But you've got a very big problem when your folks are so out of step with the American mainstream, onetime party worthies like Bob Bennett and David Frum are banished from the Republican temple, your leading presidential wannabes bar one engage in fear mongering, class warfare and say and believe nutty things that further separate them from most voters, and that one candidate has had to tack hard to the right while running from his greatest accomplishment.

Today's America scarcely resembles the America of FDR, let alone Eisenhower or Reagan, but exploiting people's fears for political gain rather than trying to ease their fears for the greater good is perhaps the biggest reason why the Republicans are unable to govern and their time in the electoral wilderness will be long.

I just read excerpts on an old report of Truman speaking to Iowa Republican farmers in the months before the 1948 election at the beginning of his whistle stop tour. The things he said to the voters then would be like deja vue today. "Oh my!" I said.

Funny that you should mention Give 'Em Hell Harry because I am well into David McCullough's great bio on the guy.

Can you be more specific about what Truman told Iowans vis a vis my post on today's GOP?

That book is one of the sources mentioned for the article. The article appeared in Iowa Heritage Illustrated in the Winter 2007 issue. The author is David E. Balducchi, who (at that time, anyway) worked for U.S. Department of Labor in D.C. where he became acquainted with individuals who participated in the whistle-stop campaign. The article is dedicated to his father, Albert, an Iowa WW II veteran who voted for Truman. Balducchi cites primary sources from the online site www.trumanlibrary.org. You may be able to get a back issue of the magazine from www.iowahistory.org, 319-335-3196. I think you would enjoy the article in full.
Coincidentally, I picked up the article and read it on the same day I read your post. That’s the way my life is. What struck a chord with me were parts of the speech during The National Plowing Match, September 18, 1948.
"You remember the big boom and the great crash of 1929. You remember that in 1932 the position of the farmer had become so desperate that there was actual violence in many farming communities. You remember that insurance companies and banks took over much of the land of small independent farmers – 223,000 farmers lost their farms.
“…There is every reason for the American farmer to expect a long period of good prices-if he continues to get a fair deal. His great danger is that he may be voted out of a fair deal, and into a Republican deal…. The Wall Street reactionaries are not satisfied with being rich. They want to increase their power and their privileges, regardless of what happens to the other fellow. They are gluttons of privilege.”
The Republican-leaning throng did not react to this blatant swipe at the GOP. The redoubtable Truman took another jab with the same invective. “These gluttons of privilege are now putting up fabulous sums of money to elect a Republican administration.
“… The Republicans are telling industrial workers that the high cost of food in the cities is due to this Government’s farm policy. On the other hand, the Republicans are telling the farmers that the high cost of manufactured goods on the farm is due to this Government’s labor policy. That’s plain hokum. It’s an old political trick. ‘If you can’t convince ‘em, confuse ‘em.’” The crowd responded with faint laughter.
(skipping a couple of paragraphs here)
“…In this 20th century, every great step forward has come during Democratic administrations of the National Government. Every movement backward has come under Republican auspices, and it is the people who have paid dearly for these reactionary moves.” With this comparison, Truman received his only boos.
Another resource Balducchi has in his possession is correspondence a half-century later, a 1998 letter from Frank Kelly to William L Batt Jr. (Both were members of the Democratic research team in 1948 as I understand it.) It said, in part, “I worked for the Senate and encountered some thoughtful Republicans who felt that Truman’s hard blows in the campaign had been a factor in the atmosphere of bitter partisanship that made it difficult to get bipartisan support for Truman’s proposals.” (“proposals” were in reference to Fair Deal plans. Can you imagine, thoughtful Republicans? With the way the Republicans are behaving now I just have a hard time believing anything Truman said affected their behavior then.)