Musings On The Deficit Reduction War 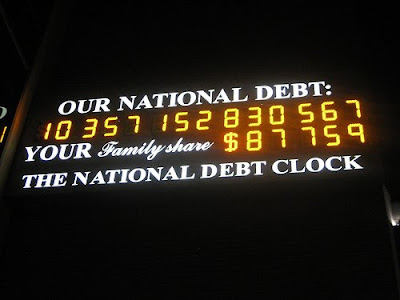 While I took a few swipes at President Obama and congressional Democrats last week as the grand game of Budgetary Chicken played itself out, it was the Republicans who came in for the most scorn for threatening to trigger a government shutdown over abortion, greenhouse gases and a new consumer protection bureau established in the wake of the financial collapse resulting in Bush Recession. In other words, grandstanding for the Tea Partiers and Christianists was more important than keeping the government churning along.

It has been pointed out that the impasse would not have occurred if the Democrats had had the cojones to pass a budget last November when they still held a majority of House seats. Fair enough. But the yawning deficit -- a product of Bush Era profligacy and fighting two wars while giving tax cuts to the rich -- would not have been an issue, or as much of one, had congressional Republicans stood up to Dubya when he decided to fight the wrong war at the wrong time in the wrong place. Or if John Kerry had not been such an abjectly awful campaigner in 2004 and the Bush Era ended the following January.

In other words, it's all water under the bridge, over the dam or whatever.

Meanwhile, the Republicans have further cemented themselves as the Party of Mean because of Paul Ryan's multi-trillion dollar Reverse Robin Hood deficit reduction plan, which means the deficit ball is now in Obama's court.

Having belatedly realized that it is long past time to get leadershippy over the deficit, or so it seems, the president on Wednesday is laying out a detail approach to deficit reduction.

* Any plan that does not slash defense spending (which the Ryan plan does not) is not worth the paper it is written on.

That means getting out of Iraq post haste, not when the Al Maliki government may want us to, mothballing an aircraft carrier or two, and making good on shelving a couple of outrageously expensive and unnecessary weapons systems.

* Alternately, any plan that proffers tax cuts also is worthless, although simplifying the tax code would be welcome, as well as long overdue.

That means more or less sticking with current tax levels for the short term because every cent of revenue is needed, as opposed to the Ryan plan flapdoodle of cutting taxes while simultaneously reducing the deficit.

* Defining what has to happen to curb the runaway costs of so-called entitlement programs like Medicare and Medicaid without compromising the elderly, the poor and all of the children who rely on one or both of them.

I have come to hate the term “entitlement program” because it is so misleading, and in the instance of these two programs what it means is that they entitle you to not die — at least not prematurely. Obama must hammer that home.

* The president’s expected call for the Republicans to join him in reducing the deficit will be DOA.

That is not necessarily a bad thing in laying the groundwork for the 2012 election because when — and if — the president and Democratic leaders (sic) begin articulating with some consistency that the centerpiece of the Republic deficit reduction plan is to steal from the Have Somethings and Have Nots, the chances of Democratic House and Senate gains and an easy re-election for Obama will be further enhanced.

There has been much wrangling over who "won" the government shutdown showdown that culminated in a deal late last week.

That's an easy one -- The Republicans, but not for the usual reasons. The Republicans "won" because a government shutdown would have been a public relations disaster for the party. The Democrats, meanwhile, had much less to lose.

Are things screwed up or what?