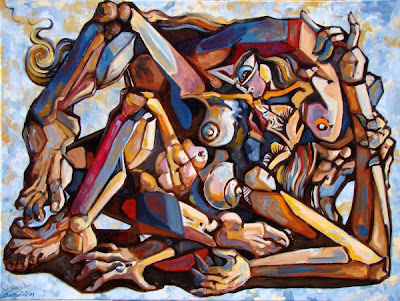 How else to account for the latest GOP-perpetrated outrage: A Democratic-led effort in Indiana to add a rider exempting women who are raped or victims of incest from a bill that would make most abortions illegal after 20 weeks got this response from Republicans: The exemption is "a giant loophole" because, as one self righteous male legislator declared, women "could simply say they've been raped."

Let that concept sink in for a moment: These haters actually believe that a woman will falsely say that she was raped in a dark alley or knocked up by an uncle in order to get a free abortion. The perversity of this notion is . . . well, pornographic.

The dust-up in the Hoosier State comes hard on the heels of legislation in the House introduced by Representative Chris Smith of New Jersey that could accurately be called The Defense of Rape Law.

The bill would make permanent the 35-year-old Hyde Amendment, which prohibits health-care programs like Medicaid from covering abortions except in cases of rape, incest and danger to the mother's life. It also would prohibit employers and self-insured Americans from using tax breaks to buy private health insurance that covers abortion.

The forcible rape definition has been somewhat watered down, but the bill is alive and kicking. So is H.R. 1, the first piece of legislation introduced in the new Republican-majority House. It would repeal the Affordable Care Act, which among other things prohibits insurance companies from charging women more because of their gender and prohibits them from denying insurance coverage because of a pre-existing condition such as a Caesarean section or because a woman is a victim of domestic violence.

Meanwhile, initiatives to punish rape victims are making their way through legislatures in Texas and Ohio, while a bill in the South Dakota legislature as introduced would consider murdering an abortion provider to be a justifiable homicide. It was later tabled.

It is my own belief that women and not government, let alone hair-on-fire Christian zealots, are in charge of their own bodies, something that I understood early on because of a mother who, while not exactly a women's libber, believed in equality between the sexes. That belief became deeply rooted through decades of social, personal and sometimes intimate relationships with women who have come from the proverbial All Walks of Life, wherever that is.

I understand that there are people whose faiths consider having an abortion, let alone engaging in non-marital and extra-marital sex, to be sinful. Then there are faiths who pile on further by considering women to be second-rate creatures whose place is in the home.

But I also understand that the further up the Republican food chain one goes, there is less support for draconian measures like those being pushed in the House and in conservative state capitals. This is because pols with a national perspective -- including those who would like to reclaim the White House sooner rather than later -- understand that many women, including those all-important independent women, are less likely vote for candidates representing a party that openly declares its hatred for them.

Finally, a little perspective: Republicans want no controls on banksters and other lenders who visit miseries on middle-class and poor American families through predatory lending practices. I can only imagine that an accidental -- and because of tough economic circumstances -- unwanted pregnancy may pale in comparison to having your family home foreclosed, yet today's Republican Party will go to obscene ends to deny a woman an abortion while doing nothing whatsoever to save her family home.
IMAGE: "The Rape" by Darwin Leon

Pity the bankers aren't all women....THEN they would want to control them!

What really disgusts me is that the so called "pro-lifers" are really only pro-fetus. Once the child is born unto the poor woman who was forced to give birth to it, the republicans and others of their ilk have no desire to provide for any kind of assistance, financial or otherwise, to help this woman and child. These are the same people who do not want state or federal money to go to head start programs, WIC, Section 8 housing, job training programs, etc. They hate the welfare state but by denying abortions to women force them back into the system that the pols want abolished.
Jen

Although you find it unconscionable that a woman would lie about rape or incest to receive an abortion, consider this, and let IT sink in...women have lied about rape for much less.

Regardless of your political ideology in relation to the Indiana abortion debate, the United States and other industrialized nations have a big problem with false rape claims. In the U.S. it is an unintended consequence of the women's rights movement, rape reform laws, and other gender biased legislation such VAWA.

Under our oppressive matriarchy (that's right, I said it, and it is) only one person has reproductive rights. Care to take a gander at who? You weep for unknown, mysterious, and mythical women who you suggest will be forced into an unwanted pregnancy through your gender political crystal ball, once again reaching for that overworn victim card.

We have unwanted pregnancies every day in this country. Unfortunately, many of these are forced upon the adult in the reproductive equation who has no rights. Are they victims too? Sadly, we do not believe in equal rights in this country, we do not call these people victims. The title often bestowed upon them is deadbeat.

Although you find it unconscionable that a woman would lie about rape or incest to receive an abortion, consider this, and let IT sink in...women have lied about rape for much less.

What's the latest reason given? To get out of a DUI.