Why McCain's Veep Choice Is So Tough 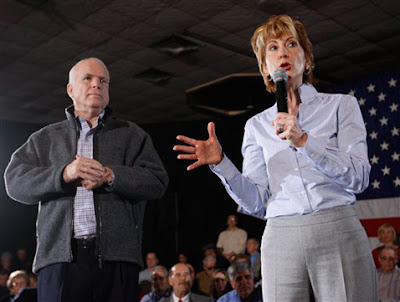 While Joe Biden brings a fair amount of baggage to the Barack Obama ticket, in retrospect he was the best choice as a vice presidential running mate because of the balance he offers. Pity poor John McCain, because his choices will be exceedingly limited if he hopes to balance his ticket.

My tears are of the crocodile variety, of course, and McCain has no one to blame but that guy looking back at him from the mirrors in those how many homes.

He made the decision to market himself as a faux maverick but of course not say or do anything that would alienate a Republican base dominated by right wingers and religious zealots with those bulging culture war rule books proscribing who is the proper god to worship, what women cannot do with their bodies, who is truly an American, and so on and so forth.

While Obama had a zillion possible running mates because of the Democratic Party's diversity, or should I say notorious diversity considering how many bridesmaids and their supporters he left at the altar last week, McCain is in a fix.

If he truly was a maverick he would not be the presumptive GOP nominee. If we pretend that he is a maverick then he could balance his ticket with an un-maverick, of which he would have an inexhaustible supply to choose from.

So is McCain going to pick another old white guy?

He may have no choice, but think of the manna from one-liner heaven for late-night comedians if he chooses a Rudy Giuliani, who besides being a one-trick pony is like him a serial adulterer, or a Mitt Romney, who beyond his past as a flaming liberal governor before he saw the conservative light would give the ticket more wealth and kitchen tables than many African nations.

Is McCain going to pick a woman?

Carly Fiorina would seem at first blush to be a good choice because she could read McCain's email for him and might even bring him his slippers at night so as to not totally alienate the party's base. But the dear has feminist tendencies, so she's a non-starter. And about all that Sarah Palin would bring to the big dance is zero name recognition and some undrilled Alaska oil.

Tom Ridge and Joe Liberman are non starters for obvious reasons, so this pretty much narrows the attempt at a balancing act to semi-obscure and truly unknown party regulars for whom AARP membership is still a few years off.

But if anything should happen to McCain, who as a septuagenarian has about a 1 in 6 chance of packing in before his first term is over, do we really want a president like a Palin or Tim Pawlenty who hasn't had a whole lot of practice at anything beyond ribbon cuttings?

Despite the Dems and the allied main stream media’s desperation to see Romney as McCain’s Veep, Mitt is clearly out, with (1) Obama doubling down on the class warfare theme (McCain’s 7 houses) and (2) McCain doubling down with ads showing the hypocrisy of Biden attacking Obama in the primaries — Romney did way more than that contra McCain.

This leaves only Govs Sarah Palin and Tim Pawlenty. Pro-abortion Ridge and Dem-Lieberman were never real considerations, despite relentless media goading. Pawlenty’s lackluster TV performances, coupled with Palin pizzazz, the primacy of oil drilling and the ticked off women/Hillary voters, does now portend a McCain/Palin checkmate on the Dems. This is so albeit the Dems and liberal media dare not mention Palin’s name, that is, everyone but…..

And if there’s any question as to Palin being uniquely positioned and able to more than nullify Biden in debate, see the excellent discussion at palinforvp.blogspot.com