A Potpourri Of Convention Zingers 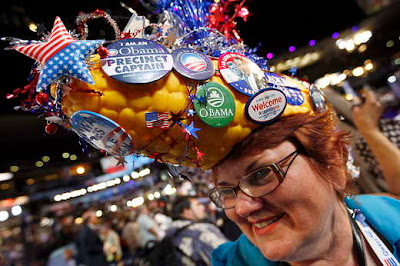 While no one would confuse the Democratic National Convention with "Comedy Central," there have been some boffo jibes and great lines:

"John McCain calls himself a maverick, but he votes with George Bush 90 percent of the time. That's not a maverick. That's a sidekick."

"I spent 20 years in business. If you ran a company whose only strategy was to tear down the competition, it wouldn't last long."

"You know, it was once said of the first George Bush that he was born on third base and thought he'd hit a triple. Well, with the 22 million new jobs and the budget surplus Bill Clinton left behind, George W. Bush came into office on third base, and then he stole second."

"These times require more than a good soldier. They require a wise leader."

"We simply can't drill our way to energy independence. If you drilled everywhere, if you drilled in all of John McCain's backyards, even the ones he doesn't know he has, that single proposition is a dry well."

"With an agenda like that, it makes sense that George Bush and John McCain will be together next week in the Twin Cities. Because theyse days they're awfully hard to tell apart."

"Sometimes loving your country demands that you must tell truth to power."

"If I had beaten the old man you'd've never heard of the kid and you wouldn't be in this mess."

And finally, this gem was in the draft of a speech by Dennis Kucinich speech but was excised by Obama's people:

Photograph by Charles Dharapak/The Associated Press
Posted by Shaun Mullen at 1:51 AM
Email ThisBlogThis!Share to TwitterShare to FacebookShare to Pinterest