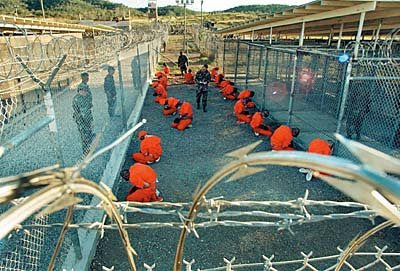 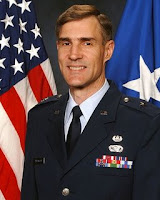 When the Bush administration put out the word that only guilty verdicts were allowable at the Guantánamo Bay war crimes tribunal, Brigadier General Thomas Hartmann saluted crisply and answered the call.

Hartmann (photo), an Air Force reservist and corporate lawyer, has been a relentless and aggressive advocate for the military commission system despite his supposedly neutral role and so shamelessly pro-prosecution that a military judge has barred him from acting as a legal advisor to an accused terrorist for the second time.

The judge, Stephen Henley, also ordered a new top-level review of the charges against Mohammed Jawad, who is accused of attempted murder for allegedly throwing a grenade as a teen that wounded two U.S. soldiers and their translator in a bazaar in Kabul, Afghanistan.

Hartmann's aggressive advocacy in the media and other public statements ''compromised the objectivity necessary to dispassionately and fairly evaluate the evidence and prepare the post-trial evaluation,'' Henley ruled in declaring that the general could not serve as a "neutral advisor" on the case.

The ruling means that Pentagon officials will need to appoint a new legal advisor over the trial, one of 20 so far in the pipeline. Hartmann still has oversight of the other 19.

Hartmann's first disqualifiction was in the run up to the just-completed trial of Salim Ahmed Hamdan.

Hamdan, who admitted to being Osama bin Laden's driver, received a 5 1/2 year sentence after being found guilty of only a lesser charge of material support for terrorism and acquitted of the far more serious charge of conspiracy.

The unexpectedly light sentence, which means that Hamdan could be released in about five months because of time served, has put the Pentagon in a quandary: While the White House got less than a half a loaf with the sentence, it can claim that the system worked but at the same time has vowed that Hamdan will not be released from custody until the Global War on Terror is over.

Defense Department officials acknowledge that there are concerns about the public perception of holding Hamdan after his prison term runs out because military commissions might be seen as a "show process" with no meaning to its sentences.

Who would think that?

It also is possible that precedents could be set in civilian courts if Hamdan's attorneys file a habeas corpus petition seeking his release in five months. As it is, Hamdan previously won a Supreme Court case that invalidated the Bush administration's earlier military commissions procedures.

WHAT' SHOULD BARACK OBAMA DO?
Should Bush administration torture regime perps be tried for war crimes?

My own view, articulated here, is that while doing so would certainly appeal to the emotional side of people like myself who as a proud American takes personally how my country has been hijacked by these thugs in pinstripes, it is beyond the pale to think that a U.S. court of law would address the war-crimes issue as such.

More pertinent to the discussion -- and there must be a discussion and not merely a partisan lynching party led by left-leaning screaming memes -- is whether these officials knew that what they were doing might be illegal. The answer is "yes," and when and if that is established, criminal prosecutions should begin.

Legal eagles and others who are giving advice to the Barack Obama campaign see little political advantage in the man who in all likelihood will be the next president discussing how his administration would tackle the torture issue.

As Mark Benjamin notes in Salon, Obama has gone out of his way to not address this sticky wicket other than responding to a question by my pal Will Bunch of the Philadelphia Daily News, whom he told without much enthusiasm that he is open to the possibility of investigating potential high crimes in the White House.

"Don't hold your breath waiting for Dick Cheney to be frog-marched into federal court. Prosecution of any officials, if it were to occur, would probably not occur during Obama's first term. Instead, we may well see a congressionally empowered commission that would seek testimony from witnesses in search of the truth about what occurred. Though some witnesses might be offered immunity in exchange for testimony, the question of whether anybody would be prosecuted would be deferred to a later date -- meaning Obama's second term, if such is forthcoming."

I can live with that, albeit reluctantly, because I understand that such an effort has to be as bipartisan as possible, and as awful as the torture regime has been, I don't sense that many people not on the left have the appetite for swiftly moving toward prosecutions. These would be difficult anyhow because the Justice Department sanctioned the use of torture, giving it a veneer of legality, and Congress conveniently amended the War Crimes Act to make prosecutions more difficult.

Furthermore, President Bush might peremptorily pardon likely defendants at the end of his term.

A NECESSARY SECOND LOOK
A federal appeals court is taking the extremely rare step of taking a second look at a previously dismissed lawsuit by Canadian engineer Maher Arar, who was tortured in Syria after being renditioned there by American authorities.

A three-member panel of the Second Circuit Court of Appeals dismissed a challenge from Arar last June, but more than a dozen judges on the court say that the suit must be revisited even though Arar's lawyers had not asked for the court to reconsider the decision.

NO RX FOR TORTURE
The American Psychological Association is weighing a resolution to ban its members from being involved in military interrogations and torture.

The actions of psychologists have been called into question as their role in the Bush administration's interrogation policies in Rumsfeld Gulag detention centers around the globe has been made public.

"We need to make policy changes to ensure that this never happens again," said Steven Reisner, a New York psychologist who spoke at an anti-torture rally outside the APA's annual meeting in Boston.

Reisner noted that psychologists' involvement in interrogations that include prolonged isolation, sleep deprivation or sensory overload violates the primary responsibility of all medical personnel to do no harm.

But some shrinks have opposed the measure, saying a resolution passed last year that prohibits taking part in specific acts of torture is enough. The measure bans direct or indirect participation in 19 forms of torture including mock execution, rape, use of drugs, and exposure to extreme temperatures, and urged the government to discontinue such practices.

"Torture and abuse are always unethical and prohibited," said Stephen Behnke, who directs the association's ethics office. "The question is how to best fight an administration policy that permits such practices."

Under the association's ethics code, psychologists may "serve in consultative roles to interrogation and information-gathering processes for national-security related purposes" as long as they don't include the 19 prohibited torture acts.

Members are divided on whether that should change.

"In my brief but thoughtful existence, I have permitted myself only once the confidence to coin a law of life. It is that there is no such place as rock bottom. There is a sliver of solace, I suppose, in the thought that you have not yet sunk as low as you can sink; but it also robs you of the exhilaration that there is nowhere to go but up. Whatever the emotional consequences, the law that there is no such place as rock bottom is deeply counter-intuitive: the belief that things cannot get worse is a regular feature of contemporary experience, and it is often quite plausible. In the castle of culture, certainly, it is our daily bread. Why, just some weeks ago Christopher Hitchens and his camera-ready conscience went and got themselves waterboarded for the pages of Vanity Fair, which are anyway torture enough. There are many things that might be said about such a stunt -- that moral understanding is not arrived at by means of the senses, or by personal acquaintance with evil; that ordinary intelligence and ordinary imagination are quite sufficient to establish the foulness and the folly of such procedures, which is why judges who have not dressed up in Guantánamo drag have been able to rule persuasively against them; that the victims of waterboarding do not commonly towel down and head for the Waverly Inn -- --but I have no intention of dignifying this high clowning with serious reflection. I hope only that Hitchens next tries rendition."

Shaun, I think a more daunting question that will face Barack, if he wins the Presidency, will be whether he will pardon Bush Administration officials, including Cheney and Bush, for Crimes commited in office. McCain will face the same question. I think I know how McCain would act. I am not sure about Barack. But it will be one of the first requests he recieves when he is Prtesident if the neocons are into protecting their legacy at all costs. I wrote about this on July 25th but haven't seen anyone want to ask Barack or McCain.

Isn't Hitchens on your side regarding this issue?