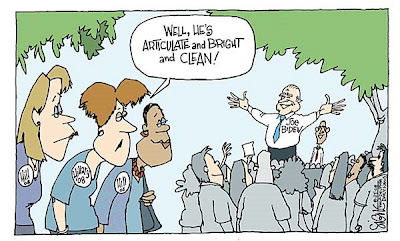 There is a temptation to feel jaded about the presidential conventions, with all of their careful staging and production values, but they are a chance for Americans to get a good look at the politicians who would be president. The impressions made at these obsessed-with-prime-time events can be defining.

Senator Barack Obama goes into the Democratic convention in Denver with a clear challenge: to match the soaring oratory that brought him to this moment in history with a strong and detailed explanation of how he will address the country’s many dire problems.

Biden and Obama are now in nearly total agreement on the war, with both advocating a staged withdrawal of most troops within 16 months of inauguration day. Obama has even shed some of his initial misgivings about Biden’s three-region solution, saying he’d be open to the plan if Iraqis themselves signed off on it. Biden doesn’t talk about the plan much anymore, but he still supports it, aides say, and believes it will "organically" evolve as Iraq's political structure.

-- GLENN THRUSH and AVI ZENILMAN
Barack Obama’s veep text blast is not only the greatest advance in political public relations since the fireside chat but also a more important wake-up call for the mainstream media than the one many reporters got at 3 a.m. Saturday.

. . . The traditional media need to invest in their own electronic-alert systems (and compelling products to utilize and monetize them). They also need to learn to actively promote their stories on Digg, Twitter, Facebook, YouTube and all the other places that a growing number of people look for news.

If the MSM sit back and wait for readers and viewers to come to them, they are going to be mighty lonely.

-- ALAN MUTTER
McCain crashed three planes, ruined another by flying too low and hitting power lines and one exploded on deck. He only saw 20 hours of actual combat. Which is not to imply that he didn't serve honorably. It's just that his service wasn't particularly exemplary or notable. This is the experience he's basing his campaign on and it's weak. If we had a functional media, this factual history would have replaced the mythical narrative a long time ago.

-- LIBBY
I see no reason why John McCain should accrue all rhetorical gain from the years he spent in Hanoi, cleansing humanity's sins not living in a house. That's why, when the new semester begins in a week or so, I'll be taking every opportunity to remind students and colleagues that because John McCain was a prisoner of war, their complaints and criticisms will not be taken seriously. When students, for example, wonder why their papers have not been marked in their usual, borderline-timely fashion, I'll explain that like John McCain -- who was once a POW -- I did not have a pen handy, and I was probably thinking about more important things. Or when colleagues wonder how I could have "forgotten" to attend yet another faculty senate meeting to help ratify decisions that have already been made by our natural and bureaucratic superiors, I will remind them that John McCain once missed five years of meetings when he was being held captive in Hanoi. I also hope to use John McCain's POW status to relieve me of cat-litter-scooping duties as well as the burden of paying for my own drinks, and to immunize me against the usual accusations of slothfulness and general moral dissipation. I suppose if I were running for some kind of public office, this might constitute a decent campaign strategy.

-- JAMES POULOS
Being rich does not mean being out of touch. Teddy Kennedy and the late John Heinz proved that beyond a measure of a doubt. But many of today's leading politicos are filthy rich, or in the case of John McCain and John Kerry, married into big money.

This is why, in one sense, the kerfuffle over McCain not knowing how many houses he and Cindy have is silly.

-- ME
Half the world economy, including the UK, is in recession or on the brink, according to research from Goldman Sachs.

The investment bank has warned that the world's major economies, including the US, Japan, the eurozone and the UK, are "either in recession or face significant recession in the months ahead".

It also raised fears that the slump could have a profound knock-on effect for China, whose thirst for raw materials and consumer products has been propping up many economies.