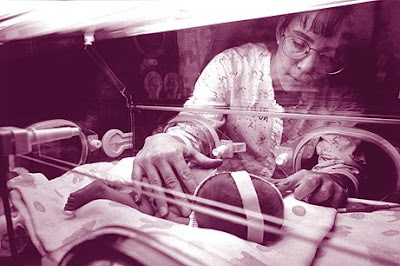 Imagine being admitted to a hospital for major surgery only to find out that while the surgeon and anesthesiologist are poised to do their jobs, the nurses are somewhere else.

That situation is analogous to why the New Jersey hospitals crisis, the worst in the U.S. and a harbinger of things to come elsewhere as the nation's health-career system slowly collapses, is not going to get better anytime soon. The crisis in the Garden State is being addressed in a politically expedient and piecemeal way that neither recognizes the impact that the crisis in nursing itself is having on the situation nor have nurses been consulted or empowered.

When we last visited the situation in April, it was dire:

, the most densely populated and second wealthiest state, had 112 hospitals 20 years ago. Today it has 74 after six closed in the last 18 months. Meanwhile, four others have announced plans to close and five filed for bankruptcy protection, with about half of the others losing money like an ER patient hemorrhaging blood because of gunshot wounds.

Hospitals should be no more immune to the effects of bad business practices than any other enterprise, and indeed some of the closings are the result of lousy management, including a failure to remain competitive as the industry lurches away from community-based facilities to those where making profits for shareholders trump all other concerns.

So what has happened in the intervening four months?

A so-called health reform package has been signed into law by Governor Jon Corzine that is supposed to bring more accountability and transparency to the hospital system.

The four bills in the package create:

* An early-warning system that gives the state the authority and information needed to monitor hospital finances so that distressed hospitals can be identified before the proverbial hits the fan.

* A cap on hospital charges of no more than 15 percent about the Medicare rate to insure that poor working families without health insurance are not overcharged.

* A requirement that acute-care and state psychiatric hospitals hold an annual public meeting for the community it serves.

* A comprehensive training requirement for hospital board members as a means of increasing accountability in hospital management is now required.

While these four laws seem good on their face and are a step in the right direction, as a whole they do not begin to deal with the roots of the crisis, only the symptoms. They are the equivalent of holding back a flood with a bucket because one of the core issues -- perhaps the core issue -- is the degradation of nursing care and the flight of precious registered nurses from the state's remaining hospitals in large part because of the plantation mentality of the executives who run them.

The blame for this lies primarily with the New Jersey Hospital Association, which is the health-care equivalent of OPEC, the petroleum cartel.

While the NJHA was a supporter of the reform package, it has scrupuously worked to advance the agendas of the executives who run hospitals and has unscrupuously engaged in what, like OPEC, would seem to be a pretty fair imitation of price fixing when it comes to compensating nurses at member hospitals.

As it is, some hospitals are engaging in unfair labor practices with their nurses and other subsidiary staff, and for this nurses themselves share some of the blame.

RNs trace their lineage to Florence Nightingale-like figures and it is hammered home from nursing school on that no sacrifice is too small. As a result, as vital as their roles are, nurses keep taking it on the chin and their state association and the few unions do not exert any discernible clout.

The nursing crisis is playing out one nurse and one hospital at a time, a kind of slow-motion Hurricane Katrina as older and more experienced nurses leave the profession and are not replaced.

A study by the Collaborative Center for Nursing paints a frightening portrait of a profession in crisis:

The average age of a registered nurse in New Jersey is 52, while the general population is living longer and its fastest growing segment is those over the age of 85. RNs are quitting in droves because of poor or nonexistent retirement benefits, inadequate salaries, lack of job opportunities, oppressive work environments and burnout.

More than 50 percent of the RNs interviewed for the study said there were too few RNs and support staff to properly do their jobs. Almost 40 percent said that because of their workloads, their ability to identify important changes in patients' conditions was diminished.

The shortage is exacerbated by the inability of 's schools of nursing to meet the growing demand, and the number of new graduates would have to triple to prevent the shortage taking on massive proportions by 2020.

Of course, it makes a good sound bit.

Also, remember that the MD's are usually not employees of the hospital but the nurses are.

Also, for credibility, what do the laws of NJ say about the level of service required. Does NJ require a level of service for certain procedures that drive the costs well above what CMS will reimburse?