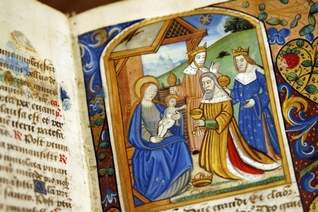 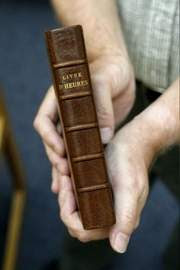 After years of upheaval and warfare, by the mid 15th century a period of relative calm had descended on England and Europe. On the continent, the Battle of Castillon, the last in the Hundred Years' War, had been fought, while child King Henry VI ruled England. In the Germany city of Mainz, Johannes Gutenberg perfected the first movable type printing press, a seminal achievement of the early Renaissance.

Meanwhile, at a monastery in Amiens in northern France, monks assembled a small but exquisite Livre d'Heures, hand copying in bold calligraphy religious texts, hymns and prayers, and watercoloring a series of 10 paintings and 17 decorated initials, which they garnished in gold. The 130 5-by-7 inch pages were made of vellum, which is stretched calfskin.

Considering that it's 500 years old, this particular Book of Hours, which sits opened before me as I write this, is in remarkably good shape.

The completed book crossed the English Channel where it was purchased by a person of some wealth, possibly for his wife or daughter. The book also may have been purpose made for the owner, but in any event its contents were keyed to the hours of the day when its user sang selected hymns and recited selected prayers.

This Livre d'Heures appears to have had various owners through the centuries. There are "1615," "1657" and other notations as the book was handed down, or possibly sold, and includes one that reads "Car sans heures ne puys dien prier," which translates as "Without these hours she cannot say her prayers." The book was rebound in the 17th century and two ornate metal clasps added to keep it firmly closed when it was not being used.

While I can read much of the Latin but only bits and pieces of the French text, it is the remarkably vibrant illustrations that keep drawing me back.

My favorite is an Adoration of the Magi. This painting, shown above, shows Mary with the Christ child and three Wise Men. If you look closely, Mary's face has been smudged almost completely away, probably because it was repeatedly touched during prayer. Whew!

This particular Livre d'Heures was purchased for the rare book and manuscript library where I work. Don't ask me how much it cost because that is not important. What is important is its value as a primary resource. Facsimiles or online versions just don't have the breadth and depth of an original for scholars of early Renaissance art, book binding, medieval Europe, religion and other disciplines.

At a time when many libraries are gung-ho for digital acquistions and we are doing a fair amount of digitizing ourselves, mostly large maps, postcards and other ephemera, there is nothing in the age of the Internet that can begin to replace, let alone improve upon, removing a treasure such as this Livre d'Heures from its slipcase and turning its pages on a journey back to simpler and more devout times.

Photographs by Jennifer Corbett
Posted by Shaun Mullen at 1:00 AM
Email ThisBlogThis!Share to TwitterShare to FacebookShare to Pinterest

Actually, the smudging of Mary's face was likely due to kissing the image rather than touching it. Some illuminated manuscripts even had a small image in the margin for kissing to preserve the main image on the page.