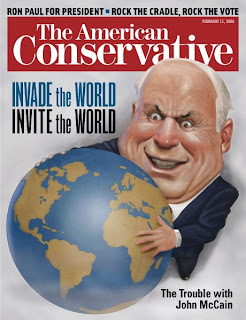 Can you imagine the howls of outrage from the John McCain camp and its helpmates in the right-of-center media if Barack Obama was in regular contact with the president of Georgia, had sent his own emissaries to the beleaguered country, called the dust-up the first serious crisis since the Cold War and was stepping on President Bush's lines?

And doncha think that Vladimir Putin is laughing his ass off at what a bunch of douche bags these guys are?

We denizens of the reality-based community are overburdened during this campaign season; it's impossible to track all the lies, much less deconstruct them. The only sane course of action is to focus on the lies that are most egregious, or most mendacious, or breathtakingly audacious.

How about all three? Consider John McCain's current claim, in his TV and radio commercials, that Barack Obama "voted to raise taxes on people making just $42,000." That's the kind of claim Republicans love to make, because they know that millions of voters are predisposed to view all Democrats as tax-hikers. And this particular McCain ad is clearly in heavy rotation, because last night I saw the TV version four times within 90 minutes. The only problem is that the alleged straight talker's claim is false or misleading in at least five respects.

This is how Republicans traditionally play the game - indeed, "maverick" McCain is a traditional Republican - and they do it because it works.

If you want a lousy interview with McCain, ask about his wife—not for any lack of feeling, I suspect, but for lack of words about feelings. His old-school way of expressing affection? If he likes you, and you work for him, you're an "incompetent jerk''; if he likes you, and you're a bunch of reporters writing down his bons mots, it's "What do you want, you little jerks?"; and if you're a kid who's just asked about his age, and he wants to show that sure, fine, he likes you anyway, it's "Thanks for the question, you little jerk. You're drafted."

Maybe it's my upbringing, in an all-boys British high school, where this kind of banter was quite normal. But there's a great deal about McCain's humor, sense of fun, emotional reticence - and not the dry drunk psychic shutdown of Bush - that appeals to people. Even his obvious emotionalism in a situation like Georgia - which may not make him the steadiest commander-in-chief. The coolness of Obama is hard to latch onto.

McCain isn't confident that conservative policies and personal experience can win, given the ruinous state of the nation after eight years of Bush. So he has made a fateful decision: he has personally impugned Obama's patriotism and allows his surrogates to continue to do that.

Conservatives seem to have become so accustomed to being able to define by fiat which things are manly “real American” activities and which only puny foreigners would engage in, that they’ve now gone completely ’round the bend. First we learned that real men don’t inflate the tires on their car properly, and now the RNC is mocking obama for taking his shirt off at the beach. Or maybe they think the problematic thing here is that he likes to vacation at the beach during the summer? Or something. But this all has at least the superficial appearance of excruciatingly normal behavior. What will be next — attacking Obama for shaving in the morning? Brushing his teeth?