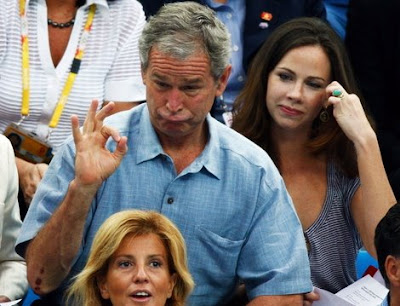 I remember the last time I was invited to one of Karl Rove's quiet journalist lunches - in the summer of 2001. Heh. I provoked his displeasure by asking about the deficit. Eight years later, what the Bush administration has done to America's moral standing in the world is only matched by what it has done to America's fiscal standing. Anyone even faintly aware of the conservative concepts of sound money and solvent government should be furious. As with torture, it isn't just the scale of the betrayal; it's the glee and recklessness with which it is promoted. Deficits don't matter, huh, Mr Vice-president? Just like Geneva. Quaint. Over. Meaningless.

-- ANDREW SULLIVAN
It's time to declare a cease fire in the failed war on drugs. It's time for a rational program of legalization and regulation. It's time for common sense.

-- PROFESSOR BAINBRIDGE
Barack Obama has given us several real doozies in this campaign. Some of his utterances have been notable for their gooey vacuousness – harmless tufts of rhetorical fluff that cause his disciples to swoon but initiates the gag reflex in the rest of us. “We are the ones we’ve been waiting for” may draw huge applause and chants of "O-Ba-Ma, O-Ba-Ma" but forces the rest of us to listen to his speeches on an empty stomach lest our most recent repast make an unwelcome appearance in the form of industrial sized chunks of barely digested Cheeto's.

-- RICK MORAN
A convergence of events--the Russian crackdown in Georgia, Musharraf's imminent impeachment in Pakistan, the continuing impasse over Iran's nuclear ambitions--is underscoring the damage of the bellicose Bush foreign policy to America's relations with the rest of the world.

As the McCain campaign mocks Obama's willingness to negotiate with rather than bully adversarial nations and dicey allies, reality keeps offering up situations that demonstrate the failure of the neocon blueprint for American world dominance by military power that took us into an unending war in Iraq.

In a world where parents can be accused of playing the "autism card," something must be wrong.

Joe Lieberman, whose recent partisan conduct has been wearing on the nerves of congressional Democrats, no doubt realizes that he's burnt some bridges with his former party. Lieberman is also no doubt aware of the fact that if the Senate Democratic caucus grows next year, which is likely, the chances of him remaining as a committee chairman are exceedingly small.

So, for the first time in a long while, he’s trying to increase some Democratic goodwill — by buying it.

Now that we can measure it, we find that Russia’s GDP is approximately equal to that of Portugal (which is not to knock Portugal). Much of Russia’s wealth comes from resource extraction: in other words, Russia is not making stuff. Is it thinking stuff instead? Well, is there a nascent biotech or semiconductor industry in Russia today? (Or is there maybe some other, more esoteric kind of activity that hasn’t yet permeated popular consciousness?)

How are Russian universities doing?Russia is fairly populous, although no one would call it densely populated. However, its population is shrinking; in part, because it is not a healthy country.